A definition of theatre

As a springboard I will use Grotowski´s definition of theatre which asks the question: what is the least we need have to make theatre? His answer is an actor and one person watching.
I would ad: some sort of action. It would not be very much theatre with the two just staring at each other. But we wouldn’t need more than a hand gesture, an extra deep breathing or a movement of an eye to make it theatre, anything that can be given an implication.
There is no need of a plot, a message or even an idea behind the action. The audience is fully capable of giving the action a meaning by their own. And they will. It is within the human character to so, to create meaning of the seemingly meaningless. And here communication starts whether or not the communication is deliberately. 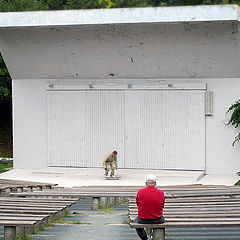 But we can also see the concept of theatre much broader. Then we are talking about theatrical events such as ritual reveals, invisible theatre, early dramatic exercises, happenings or theatrical games.
The pre-Christian word for theatre in Scandinavia was “leikr”.  It could involve anything from music, sports and dance, jokes, magic events, drama, religious rites, even love and war. “Leikr” is the origin to the word lek, meaning “game” or “play” in English (or “leu” in French or “Spiel” in German). Johann Huizinga defines it:
“ a free activity that intentionally is more the ‘the usual’ and not ‘for real’, but at the same time intensely and devoutly engages those who play /…/ I has its own limits in time and space in conformity with the given rules.” 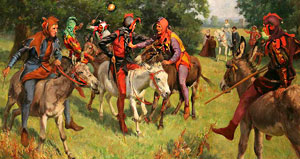 It is a quite describing word for what theatre or a theatrical event can be. It also cover a lot of the postmodern drama that now are dealing with deconstructing theatre back into the idea of the early theatrical event. And it opens up and liberates the concept of theatre, for me personally, not just in theory but in practical life in theatre and Vulgar Comedy.

One Response to A definition of theatre