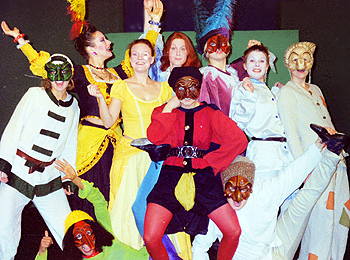 To act in a mask is a technique in itself. It means that there is a lot of rules of how to handle the mask. Sometimes they are really helpful, sometimes we find there are just too many guardians of those rules.
Of example it is not recommended to touch the mask with ones hands. But there are plenty of exceptions that sometimes works, like using gloves, touch the sides of the mask, grip an extremely long nose and so on. There are simply no strict rules to follow. We must explore ourselves what works or not.
What it is about is that the mask, with its burlesque size and static expression, dies when it comes to near a living hand. The actual dead material as the mask consists of reveals itself in a too close comparison.

It is wise, in most cases, to avoid showing skin when acting in a mask in general and when playing comedy in particular. That goes for the whole costume. It is something essential that happens with comedy when showing skin. It makes us see through the psychological eyes of realism on violence, sex and oppression that most of the comedy boils down to. But that way the comedy transforms into naturalism or action.

There are countless quotations and aphorisms about how the mask lies or conceals the truth. That is something that has followed the mask since the early Christianity and is the same for all three monotheistic religions. The monotheistic cultures regards humans as only one nature and that behind the mask lies the only truth. In polytheistic cultures, that have a much closer relation between the divine and the human, the mask is seen as a channel for a God or a transformation or transportation to the world of spirits. 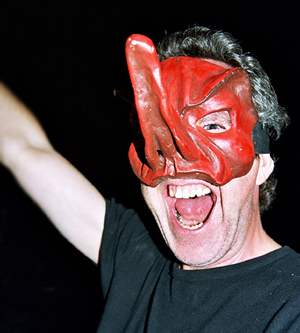 Instead I believe that it is contrariwise, even if we emanate from the monotheistic culture, and especially when we move in a theatrical reality. When we no longer can hide our intentions with our faces, with looks and grimaces, our body language becomes much more obvious. Since we have for so long strained ourselves to express ourselves through the face, we have not put any importance in the expression of our bodies. But off course we see and interpret the body language we see, even if it is done unconsciously. (See HERE) And since the body is just as expressive the body will reveal our lies.

One Response to A few dogmas, concerning mask acting