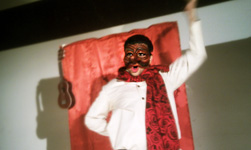 A Kela Commedia Extravaganza is an international one-man-Commedia dell’Arte-show, made to tour the world. The show had its opening 18/12-2010, in Khar Bandra, Mumbai at Le Sutra – India’s only art hotel. 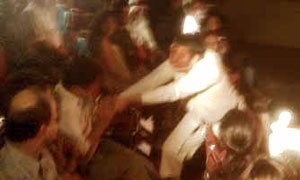 The performance is an exploration in using an extremely collective form of theatre as a one-man-show. Deepal Doshi plays all eight masks, who are singing, dancing, fencing and interacting with each other, creating a wild frenzy onstage. All the time he lets the audience in to a world full of insanity, absurdities and crazy action.

The plot is a classical simple Commedia dell’Arte-story about the two lovers who are the victims of their fathers who has other plans for them. In this case it’s about switched marriage contracts. And there are the subplots with Signora and Capitano involved in a love affair behind back of Pantalone, the zannis trying to avoid their jobs, Dottore’s scroloquio, Capitano’s bravura and the lovers fighting each other in disguise. 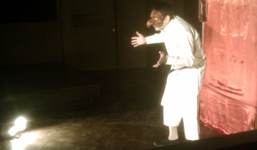 The work started in Stockholm, Sweden in the spring of 2010, and then we worked very sporadic in the fall until we finally went to India to work more intense in November.
The process has been concentrated around finding ways for the masks to interact with each other and to create frenzy needed in Commedia dell’Arte, except from handling the new technical challenges we ran into.

A Kela Commedia Extravaganza is a collaboration between Kompani Komedi and Rangeelay Theatre Ensemble. It is also my first show that has opened in India. Hopefully there will be more in time.