A tribute to life

“It [Commedia dell’Arte] owed everything to the actor, very little to drama or literature. It trained its own players, created its own conditions, travelled with its own costumes and properties, sometimes with portable stage.”
From “The Theatre – a Concise History”, Phyllis Hartnoll

Commedia dell’Arte is a sort of light hubris, a dizzy, intensive feast, close allied with a hilarious, uninhibited promiscuity; a journey, in a miraculous world, always going to in a new direction, always on the verge to catastrophe.
The happy message in Commedia dell’Arte is always outmost and only the same – life’s victory over death. Therefore is Commedia dell’Arte always close to the catastrophe. Without the immediate threat from the dark forces – that represent death – the authorities, the regulations, and the law and so on, we will not see the antagonism that we need in order to see life finally win. But the catastrophe is no real threat. We know from the start that Arlecchino never will succeed to commit suicide or that Pantalone will never manage to get Columbina in bed. This makes us believe that we, not only are equal with the world, but that we can master it.
When Pantalone gets to know that Flaminia, whom he the play through has tried to get in bed, really is his daughter and that young rival Flavio, who with the aid of Arlecchino have beaten him as much as he have been able to, really is Dottore, his old friend’s son, then we see how Pantalone’s world crumbles. We discover how Pantalone, the audience and everyone else have misinterpreted the world. The old world dies. This is not a reactionary grief over a dead world, but a tribute to the life and new possibilities that opens. (Compare with the expression “to die of laughter”.) The old world must always die to give room for a new, in the same way as the King of Carnival must die to give room for a new age when his function is done. But it is not his personal death. The body of the king dies in order to make room for the people’s body, which fertilizes on that the old and petrified dies. 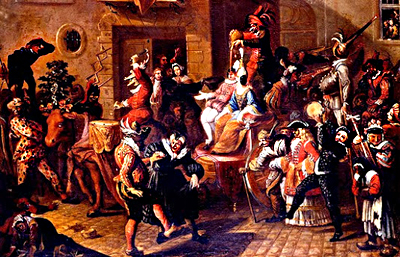 This obstinate anarchism, that Commedia dell’Arte represent, with all its vitality and energy always resists everything that hamper life in its rampage make us feel how the world constantly reproduce, in spite of all obstacles. It is when the world is static the powers can dominate us. In a constantly mutable world, which naturally are full of risks and uncertainty, laws and prerequisites keeps changing all the time. With laughter as our weapon our imagination is awakened, our critical stance to everything we can laugh at and don’t risk to be snared in fanatics. It is a feeling of openings that pour through our bodies and souls.

“All that was assessed and completed for what that time was concerned, was more or less comical, since it was confined. But laughter was merrily, for every limited determination (and therefore every fulfilment), that was dying and dissolving gave way to new possibilities.”
From “Rabelais and His World”, Mikhail Bakhtin

We, as an audience, get our daily fears engulfed by the creativity and energy that meet us. We become a part of the vitality that we are welcomed to take part in. The mad energy from the masks that helps us sees the world from other angles that are not distorted by the “normal”. Instead we are getting a merry parody of the official, the readymade reality. 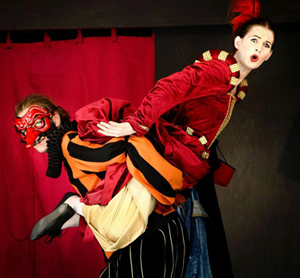 Commedia dell’Arte as a theatre form does not take a stand in social or emotional questions, no matter how satirical or emotional it is. With its anarchistic drive it has no intention in any way to change the world or even its hierarchies. There are no loyalties more that its own concerns. Commedia dell’Arte loves the nature with all its signs of life that maintains life, how obscene, brutal or egoistic it may be. It is the pedants, the misers, the hypocrites who are to be flayed, not for their weaknesses but for their life hostile stance. We can only talk about Commedia dell’Arte as a good laughter to the world and a great tribute to life.

To play Commedia dell’Arte is always essentially built on the actor’s lust. Therefore it is always very important that the actors always enjoys being on stage, that they give a hundred present and are ready to lose themselves in the play with the audience. The actors that find their lust in stating social messages or searching in their souls don’t have much to find in Commedia dell’Arte. As a gift from the carnival it is always the merriment that is at the center. Even when a mask is on his way to commit suicide or murder another mask, he does so from an absolute intend; with lust and energy. Naturally there is desperation, grief and anger, but the underlying joy form the actor and the mask to be on stage and give from oneself is still the most important message. Therefore the actor must, in spite of his hard and neurotic life, find a technique to always let in his joy in his acting. 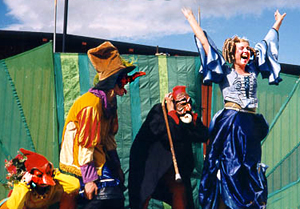 See also:
WHAT WE REALLY KNOW ABOUT COMMEDIA DELL’ARTE
THEORIES ABOUT LAUGHTER AND COMEDY
MICKE’S WORKSHOPS AND LECTURES