About satire as Vulgar Comedy

Satire is definitely a part of Vulgar Comedy with its roots back to popular comedy in ancient times. It has always kicked upwards. It can mock authority or the social order in general and its weapon is always laughter.
The first function satire has is to be mean. It is even more important than to be funny. If the satire is funny without being mean it’s simply not satire, even if it is bad satire. On the other hand, if it is mean without being funny it still is satire, even if it is bad satire. 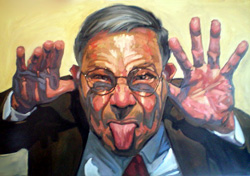 One can sometimes hear that satire should be nice in the sense of being empathic or propitiation. But the problem with that is that what is propitiation is also what disarms the satire. There is nothing like warmhearted satire.
It was in the middle of the nineteenth century that the bourgeois started to use the word humor as something propitiation. It was the satiate bourgeois in power answer, used in order to disarm the satire that upset them. They wanted to moderate and hide the tensions in society instead of display it and pull down its pants.
The Swedish author writes in his article “About humor and satire” from 1895:
-“ For satire laughter is a weapon, for humor it is a pillow, to rest upon and as this it is a superb substitute for a good conscience.”
The tool they used to neutralize satire with is “good taste”. Good taste never laugh out loud, it never satirize, never brings up embarrassing subjects, it is humor not laughter. Instead it smiles, it is comfortable it is safe and nice…
Hans Lindstöm, a Swedish satirist, writes in his doctoral dissertation from 1993:
-“When God long ago has stopped being used to execrate laughter good taste begins, first the good taste of the nobility then the bourgeois.”
Or to use the words of the Earl of Chesterfield from 1765:
-”Observe it, the vulgar often laugh, but never smile, whereas well-bred people often smile, and seldom or never laugh.” 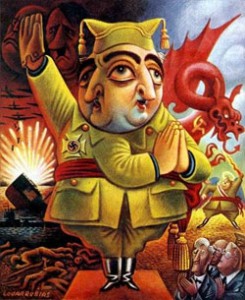 There is nothing propitiation in either Chaplin’s portrait of Hitler in “The Great Dictator” or his view on society in “Modern Times”, neither in Jonathan Swift’s “A Modest Proposal” or Orwell’s “Animal Farm”. These where mean satires pointed to even worse persons or societies.
One can always, as an intellectual experiment, try to see “The Great Dictator” through redeeming eyes or how “A Modest Proposal” with extenuation qualities. That shows its internal impossibility.

Dario Fo uses the Italian word sfottò for satire that is not subversive. He speaks of sfottò when there is no reaction from the powerful. According to Dario Fo sfottò arises when the satire focuses on superficial things as appearance or behavior. It that case, the object for the mockery might just be seen as sympathetic instead.

-”Satire is traditionally the weapon of the powerless against the powerful.”
Molly Ivins
-“Satire is focused bitterness!”
Leo Rosten

3 Responses to About satire as Vulgar Comedy