In About mask making I explained how this is all about some questions I got in for a scientific work by Thanos Vovolis at the Stockholm Academy of Dramatic Arts. This post is continuing from About teaching mask. 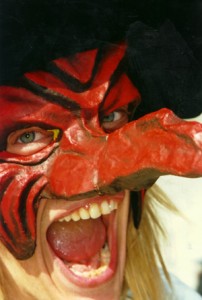 The goal when I teach mask is naturally to make as good show as possible and if I just teach because someone wants me to the goal is to have the students to understand the masks, their use and potential. I guess I also have my hidden agenda of spreading Commedia dell’Arte and mask in theatre and in the long run also spreading Vulgar Comedy.

I don’t talk about things like “the holy mask”, “the magic of the mask” and such things. The mask does not have any power or energy in itself. To the mask is simply a tool, a piece of leather, paper, plastic or wood that someone has placed in their face in order to make an effect. What we may perceive as magic is the work of the actor, not the mask itself.
It is not the piece of plastic an actor has in his face that change even if we in the audience might think so. What really changes and what we read as the face of the actor is the body of the actor, but we are not used to read the body and perceive it as the face/mask has changed.
It might be obvious, but in many theatre schools who teach mask technique wants “the magic of the mask” do the job instead of focusing on the actor behind the mask.
Neither do I care for how one treats the mask, if someone walks around with it in private or show us when they put it on and so on. I see no reason to treat the mask as a fetish.
On the other hand: I do respect fully those who use “the magic of the mask” for religious, other professional reasons or in their searching as a method to reach deeper in their work with mask. 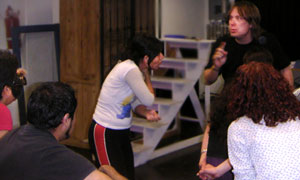 Even though it depends on what kind of mask I am working with in general I want the mask to influence the rhythm, and size of the actor’s movements, attitudes, postures and gestures.
I think it is important that the actor finds his movements from his guts. First of all it stops the actor from just wave his arms, but it also gives a stronger expression and helps the actor to “follow the inner path” in the action, since the action is created first and most from the movements.
I don’t see that an actor that falls into a trance is a purpose of its own. If it happens and if it helps the actor it is good, but it don’t fill a purpose of its own.

The use of masks also helps the actors to base their movements in their torsos and see how and where they start in the body. The mask is a good devise to show unintended postures and movements from the actor or to see clearer what I posture or attitude conveys.