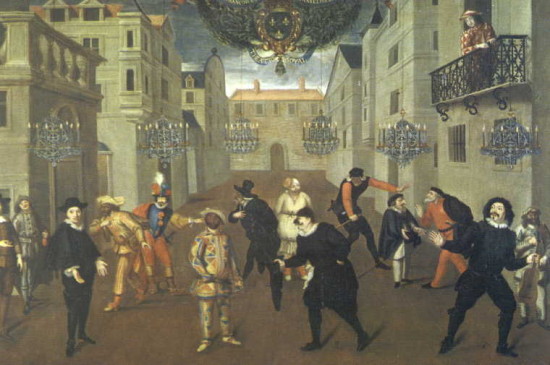 Accisi had probably existed for a while when we first hear about them in 1590, when they get a permit to play in Brescia.
As early as 1583 Pier Maria Cecchini says that he played for Alfonso II d’Este, the Duke of Modena, in a letter to the new Duke 1622. That doesn’t say that he played with Accisi back then.
In 1599 they are probably in Paris, in any case does Tristano Martinelli get presented to Henry IV and mimic him until the king sat: -“Good, You have imitated me long enough, let me do it now”.
In 1600 they travel, under Pier Maria Cecchini, to Lyon where they play before Henry IV in August, after recommendations from Vincenzo Gonzaga. They stay long and play at the wedding of Henry IV and Maria de ’Medici in December and then at the French in Paris court until October 1601.
1606 they are temporarily collaborating with Fedeli, which was led by Giovan Battista Andreini. 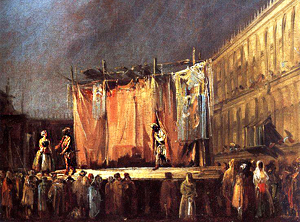 Already in 1607 they are self-sufficing again. They go back to Paris where they play during the spring of 1608 before Henry IV and gives public performances. Despite strong pressure from Henry IV and Maria de’ Medici, Tristano Martinelli, the now famous Arlecchino, stays home, since he cannot stand Pier Maria Cecchini and the other actors. Instead he joins the Desiosi under the leadership of Diana Ponti.
When they get home in 1609 they go back to collaborating with Fedeli, also this time temporarily. It seems as if both groups are tied to the Duke of Mantua. That might be the reason they tries to work together. But the leaders, Pier Maria Cecchini (who at least according to Francesco Gabrielli seems to be irascible and false) and Giovan Battista Andreini do not pull evenly.
In 1610 they have separated and Accisi tour northern Italy and abroad.
1613 and 1614 are they touring Vienna and Linz. In Linz Matthias, the Holy Roman Emperor,  ennoble Pier Maria Cecchini.
Pier Maria Cecchini publishes his book Brevi discorsi intorno alla comedia e comedanti e spettatori in 1616.
In 1618 they play in Naples.
In 1622 they rent San Luca in Venice for two year.
The last we hear from them is 1628 when they play in Parma. The same year as Pier Maria Cecchini publish his second book Frutti delle moderna comedie et avvisi a chi le recita.

See also:
A Servetta’s prolog
The mask and the actor
Workshop in stage acrobatics