Acrobatics as a discipline in Commedia dell’Arte 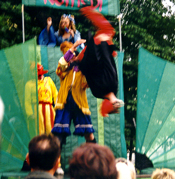 Acrobatics and slapstick (together with the music) may be the most used discipline in Commedia dell’Arte. They work with symmetries, physical turns or physically exaggerated reactions or positions. Acrobatics is a way to stylize and it is used, just as the music, to heighten the atmosphere. Both acrobatics and slapstick can also be used to physically carry the plot or as storytelling, but mostly is just used as a joke in itself.
Then one of the advantages in comparison with verbal comedy is that it doesn’t slow down the pace of the show since one doesn’t have to wait in laughter in order to be heard. In that way we can build joke after joke before the audience have recovered from the last one, and build up the frenzy that are so vital for all Vulgar Comedy. It also helps us giving the audiences surprises when we don’t give them time to think ahead. With the right timing this is the place for building up real convulsive laughter.
For the same reason – among other reasons – it is important not to “sell in” different acrobatic numbers or figures as in circus and kill all opportunities for surprise. I must always come in organically or as the obvious way to express or do something and then just be an elevated part of the acting. It can be both annoying and embarrassing with this “selling” that promise a much higher level. The more we sell the number the more we promise. And if we don’t deliver the audience will lose its confidence in us. 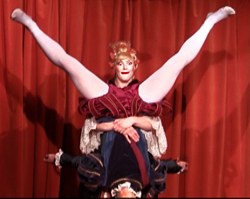 When we, by selling in every acrobatic number, we are moving the focus to the numbers instead of the plot. Therefore we are also crossing the limit between theatre and jugglery. The focus for the latter is the tricks and numbers they perform whereas theatre is focusing on its plots and its characters. It is just as important how to end an acrobatic figure without clumsiness at the end. If we look down on the floor, take those extra steps or stop for a second to concentrate after an acrobatic figure we kill the elegance of it at the same time. It is as we tell the audience that we are not really able to do it, a little like a singing a song out of key or end a beautiful song on a weird cord.
Even when we not are using the acrobatics it is an asset for the actor to know, or give the audience the feeling of always being ready to do a flip or just a great leap. This feeling of opportunity is one of the basics in Commedia dell’Arte. It creates the impression of freedom, that the masks are not restrained by the laws of nature or gravity. It is a way for the mask and for laughter itself to acknowledge their immortality and hopefully to share it with the audience. 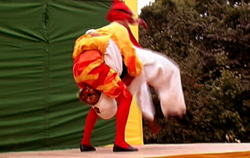