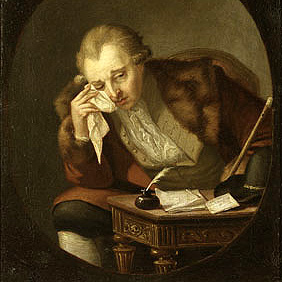 When talking about Vulgar Comedy I must, as a Swede, mention our national poet, the eighteen century poet: Carl Michael Bellman. He wrote much more than Vulgar Comedy, such as elegies and pastorals, but it is the Vulgar Comedy he is most remembered for here in Sweden. He wrote drinking songs, parodies of the Bible, occasional, nature and epinicion poetry, plays, an opera and he even created a mock fraternal organization. 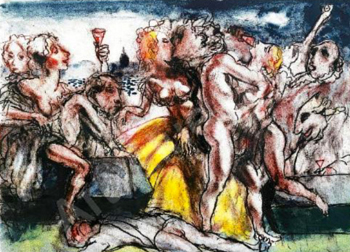 Bellman was mostly a singer/songwriter and a performer who played all his characters himself. He created an upside-down-world much like the Carnival, in his “Fredman’s Epistles” where the feast and death, myth and realism, satire and gravity, raw reality and tender rococo walked hand in hand. The whores of Stockholm became vestals, drunks became Bacchi prophets or apostles and musicians became saints and high priests in Bacchi temple. Drunkenness, sex and death became a sort of holy trinity where Bacchus, Fröja (the Aphrodite of Norse mythology) and Charon where worshiped. 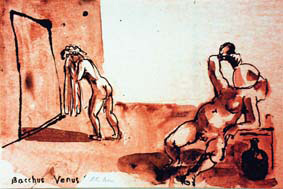 He made a collection of characters that was taken from the actual streets of Stockholm at the time, but he always described them with sympathy, like:
Fredman – once a respected court clockmaker and owner of real estate in Stockholm, became a well known drunkard on the streets of the town,
Ulla Winblad – nymph and the priestess of eroticism in Bacchi temple, a symbol of different incarnations of Venus, a whore who by the end of her life married to a customs officer or
Father Movitz – born 1721, became a drunkard when his wife died, after a collapsed career as soldier, craftsman and vintner, also a sought musician in the taverns of Stockholm.

By the end of his life…

After Bellman’s death in 1795, he became more of a symbol of lust and comedy in Sweden (a lot like Pulcinella in Neapels). Most people forgot who the historical Carl Michael Bellman really was. Instead there came a tradition of funny stories about Bellman; first stories of social rebellion for adults such as in this one:
Bellman was out walking in the royal park when he had to take a crap. So he did. He put his hat over it in order to hide it. Then he met some court ladies. He told them that he had caught an extremely beautiful and rare bird that he had it under his hat and if they were really fast caching it when he lifted his hat they could have it. So they did… (It is interesting to notice that anthropologists have found this story worldwide even in places like Uganda.)
Later around the beginning of the nineteenth century the children took over the stories and turned them more naive, like this one:
There was a German, a Russian and Bellman (it is always the same guys) stuck on a deserted island when they suddenly were granted one wish each. The German wished to go home and swosh – he was gone. Then the Russian wished to go home and swosh – he was gone. Then bellman felt lonely so wished for his friends to come back…
Bellman’s mock fraternal organization became an established social order (and still is) a real organization for keeping the memory of Bellman and giving cultural grants (one does not have to be seen publicly sleeping in the gutter twice to enter the organization anymore).
The songs was captured by choirs and used as student songs where nobody really understood what they were singing about.  Not until around the sixties the traditions around Bellman started focus on what he really wrote about again.