Carnival and the popular feast (Part 2) 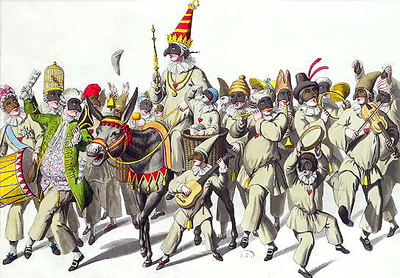 The carnival can be derived from ancient Rome and the Saturnalia. It was celebrated in Rome between 17 and 23 of December, up until the 5th century, to the glory of Saturn, the God. The coming golden age ruled by Saturn where no class differences existed were celebrated.
It was celebrated by giving gifts, total freedom of expression speech and slaves and their masters changed roles. But what is even more related to the carnival is the structure. It is very similar the STRUCTURE OF THE CARNIVAL: there was an elected king of the festivities, a Rex Saturnalis or Saturnalicius princeps, who ruled for as long as the feast lasted and by the end of the festivities he was executed, literally or symbolic.

Similar festivities where everything is turned up-side-down are still celebrated all over the world (and here I also count the European carnival) with different religious or traditional content.
Naturally the carnival was celebrated differently all over Europe. We are talking about a phenomenon that stretched its heyday during the whole medieval times and the renaissance and also was locally formed. But there was a lot of common features. It wanted to destroy everything that was associated with completed and static, that who represented the power, so that it could die and make way for new opportunities. Laughter and the merry feast was the weapons against whatever was restraining life. It was more or less the same structure when celebrating the carnival. Still when we look at the structure of the carnival celebrating we must see it as a generalization.

The word carnival comes – probably – from the Latin fraise carnem levare, “take away meat” or “remove the meat”. The carnival was celebrated from the feast of Epiphany to Shrove Tuesday when lent started. It was the feast that should let people eat and party before lent started and severity sat in.

4 Responses to Carnival and the popular feast (Part 2)