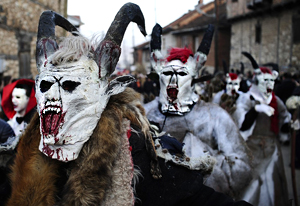 From the material that are available there are lots of examples from primitive sketches to more sophisticated plays that can stand by their own, but have been a specific part of a wedding or another official feast.

Let’s see a few examples. In England there was a parade of suitors to the “maiden”, wish she brushed of in favor to the village idiot. The parade consisted of respected citizens like the lawyer and the sergeant.
The Italian plays – bruscello (meaning maypole) – were simpler but they were attentively modeled. Two rivals, either both are young or one is young and the other one is older, were struggling over a young girl. The struggle could be in form of a debate or a fight that had to be solved before a judge or a mayor. Finally there was dance and a great dinner. From Lucca comes a scene called Rondone e Rosalba, where an old man struggle with a young man over a young girl and the young man wins. Here we also meet characters like Arlecchino, Rosalba’s father and Paggio.
The reason we have so much material from Italy is that there is was considered them as plays more than simply party entertainment.
Il Mercato (the Market) is about the rivalry between a knife sharpener and Laterna, a doctor. They fight about the merchant’s daughter, Beppina. Other suitors comes in, a haberdasher, a calendar trader and a tinman. Finally the knife sharpener wins Beppina, with the help of the servant Brighella.
Gli Amore di Belinda e Milele is about two rivaling hunters, Gerano and Milene, who loves Belinda. Belinda loves Milene, but her father, who gets help from his servant Brighella, wants to merry of Belinda with Gerano. When protests, aggravating circumstances and litany doesn’t help Belinda simply refuse to marry Gerano. Gerano and Belindas father then plans to kill Milene. But Brighella who now is on the side of the lovers, interferes by involving a magician, who takes away Gerano and Belindas father, while Belinda and Milene are marrying. Then the whole thing ends in a feast. 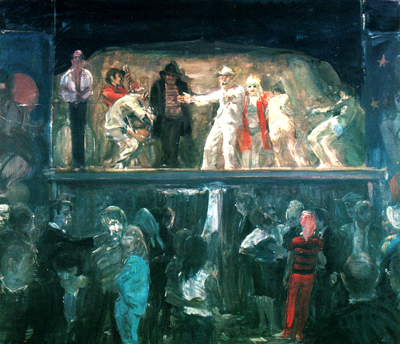 In performances like Il Mercato and Gli Amore di Belinda e Milene it starts getting hard to draw a clear line between what is carnival entertainment and what is already a full comedy. These plays are not directly connected to either the May celebrations or any other feast.