Charlatano and the square in Commedia dell’Arte (Part 1) 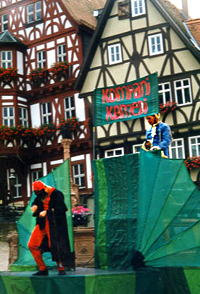 In the marketplace, that had its own popular, unofficial laws impregnated by an atmosphere of freedom from severity; where yelling peddlers, the Cris de Paris and merry citizens “entertained the public in loud swearing duels, rhythmic chants, organized festive performances and so on; an embry to Commedia dell’Arte started to grow. Under the influence of jesters and jugglers, the miracle plays (specially the diavolas) and the street life itself these appearances started to take form as small performances. Maybe the competition was too hard among some of the the street vendors and entertainment was an alternative, maybe the public demanded more and more entertainment or maybe some of the peddlers thought it simply was more fun to act then to sell.

A new workmanship started to grow among the peddlers. They become entertainers and comedians – or Charlatani as they were called at the time. (From the Italian verb ciarlatano meaning chatterbox, possibly from the word cerratano meaning from the citizens of Cerrano.) The word charlatan today, meaning mountebank, comes from the Charlatano as a character. It is from him Il Dottore has derived.
The Charlatano might slowly have taken the part as mountebank as they moved towards more real performances. The mountebank has also become, or rather has always been, a standard character in many traditions such as the “the Medicine show”, the coyote stories, picaresque rascals, Casanova, Groucho Marx, Bill Starbuck from “The rainmaker” and so on.
Reading old Italian letters and dairies we find that there were not a great difference between jugglers and street peddlers. They both went under the name of Charlatano.  Even the Commedia dell’Arte troupes that played in the streets and markets went under the name of Charlatano when referred to by the church. 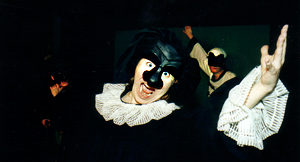 They played at the market squares for free. Their income came from the gods they sold. They would often start a scene or a song to attract people to their stage. When enough people were gathered they started to sell what they had. And not until they have sold out their gods started the show. I have also seen this kind of setup for street performances today in Pakistan and Tanzania.
But to quote a description from 1652:

“Each day at a convenient hour a Zanni or some similar entertainer steps onto the stage and begins to perform or sing in order to attract a crowd around him. A little later another player appears, and then another, and often a woman among them. Then all in the group, and with various kinds of trickery, they present a mixed bag of popular entertainment. Suddenly the key figure appears – he who is the arch charlatan, the guardian of the elixir – and in subtle ways he sets about extolling his wonderful cure-all in the most extravagant terms. After selling a great deal of it, and having gathered up all the money, he brings his principle business to an end. He is followed by another charlatan who, if the first not managed to dispose all of his wares, peddles them once again. Then after him comes a woman who similarly tries to sell her lozenges or merchandise. When they are done they inform the public thus.
A play is about to begin – a play! Closing their boxes, removing their trunks, transforming the platform to a stage, each charlatan becomes a player and just like actors, they act out a dramatic tale, entertaining the spectators with laughter, lazzi and diversion for nearly two hours.”

One usual item they sold were snake poison as a cure against anything from impotency to loss of hair. Something that is still sold in India for instance.