The former presumption for Commedia dell’Arte is lost today in the western world. That is because society has changed. The stereotypes that are caricatured in the masks of Commedia dell’Arte are not here today.
That is because today’s society is much too flexible. It is possible to move between classes. One have a much greater chance to choose ones role in society when you are not born in to an occupation. That competition also creates individualism. And that stops the mocking of the fixed hierarchies that it once was built on.
The roles can also change from time to time. The same person is not playing the same role when he is on holiday as when he is at work.

Also the circumstances are changed. Hierarchies and class differences are not as obvious today. Today no one is beating their employees on the other hand has poverty become much more shameful.
This goes also for family hierarchies, for instance today we marry of our own free will.

During the heyday of Commedia dell’Arte however one could find the stereotypes that make up the masks of Commedia dell’Arte in real life out on the street.  It was the homeless people on the streets that where mocked and became zanni; it was often real occupation soldiers that became Capitani; the vecchi, Pantalone and Dottore, where the ones that also beat their servants and had total power at home. The whole gallery of masks was present and for real. 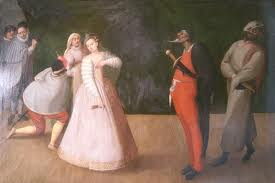 Instead of being real, the masks today, in our new individual world, become aspects of our inner life, living in permanent chaos. The masks have also been compared to the archetypes of C.G. Jung.
But no mask (aspect) is a chaos in itself. It is in the endless conflicts with the other masks that chaos arises.  It these conflicts that represents our inner conflicts and therefore becomes fun for us to watch.
It is a common saying that a clown contains a whole world, but a Commedia dell’Arte mask contains only one aspect of one man’s inner life. But all the masks in a Commedia dell’Arte performance together contain a person’s inner life and consequently a whole world.

This is nothing new. Commedia dell’Arte has always contained these inner aspects of human life, even if it has been about its contemporary circumstances and types as well. As I said before (see part two) Commedia dell’Arte basically always tells the same story, the one about death and resurrection always told in a festive context.

This is the fifth part in a series of six from a seminar I held at the Royal Dramatic Theatre in Stockholm about Commedia dell’Arte and its relevance in a modern context
See also Part one, two, three, four, or six.