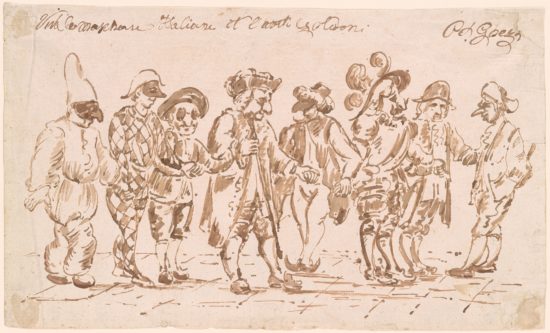 Commedia dell’Arte was definitely not just an Italian matter. It spread very soon all round Europe, above all in France, where Commedia dell’Arte was almost as at home as in Italy. When Gelosi and Zan Ganassa came to Paris in 1571 were they hardly the first to play there, even though we don’t have anything that proves it, other than that Henry III ought to have seen Commedia dell’Arte before inviting groups to play at the court. Orlando di Lasso’s group played in the Trausnitz castle in Bavaria 1568. In 1577 or 1578 Drusiano Martinelli and his wife Angelica played in England. Commedia dell’Arte groups toured in the German states in the 1570:ies. Zan Ganassa was in Spain as soon as 1574 and in 1581 another group, led by Massimiliano Milanino, came there. Commedia dell’Arte came much later to the northern countries. To Poland came among others Gennaro Sacco 1698, Angelo Costantini 1699, Tomasso Ristori 1718 and 1725 to 1730. He also played S:t Petersburg in 1733. Other cities where we know Commedia dell’Arte groups have played are Vienna, Innsbruck, Graz, Linz in Austria, Prague, Lisbon and all over the Netherlands.
As usual it is almost only the great and famous groups we know much about, since there is not a lot of information about the others. We have to go on indications from references and visual material.

The Italian Commedia dell’Arte groups got their own theatre – Comédie Italienne – in Paris 1661, where they later developed their own style of Commedia dell’Arte. Music and dance got more room, something that later came to move even closer to ballet and it developed and heightened even more the sentimental and physical entertainment in Commedia dell’Arte. The masks got a greater significance. They become stronger articulated, many of them got new more developed costumes and characters. It is also in France that Pulcinella got his hump. A lot of the teamwork within the groups got lost in France. Instead it started to contain more of solo performance and equilibrist theatre. A more or less sophisticated satire became a part of Commedia dell’Arte. It was also in France that grammelot was born, when the Commedia dell’Arte groups first was thrown out of the French theatres in 1697 and later forbidden to speak from the stage in general (except for Punch and Judy or Burratini shows).
Another reason to use grammelot was to avoid censorship. Among the authorities and the academic world the use of words was (and is) what was valued. It does so to the extent that they have a hard time understanding how to communicate in other ways. And since nothing forbidden has been said – with words – no one could be punished.
As a modern curiosity: when Odinteatret from Denmark went on tour in Peru in 1978 they were not allowed to play in the street not even to group together. Instead they went walking around the city two by two in costume and mask (including 2 meter long stilts) and got followed by lots of people. Finally they were allowed to play – once. But when the censors were about to read the script there was not one word. It can be seen in their video: On the Two Banks of the River. 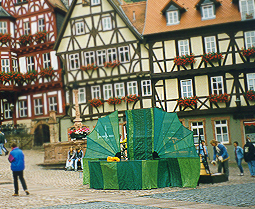 The Commedia dell’Arte groups travelled between different countries and gathered impulses, like Rabelais, the French farces, what was left of Arabic culture in Spain and so on. When they got back to Italy they brought what they learned. The most popular cities for Commedia dell’Arte and the cities where Commedia dell’Arte was most influenced by other traditions was also in the north of Italy, like Venice, Padua, Mantua, Genua and Florence.
In Napoli and the south of Italy Commedia dell’Arte – with its Pulcinella tradition – first came to develop in their own way before it spread further, sometime at the end of the sixteenth century. Many scholars think we can find its roots in the Greek Mime, which also included voice, dance and acrobatics. The Commedia dell’Arte of the south was in a way crazier, looser in its structure and was more focused on music. It was later strongly influenced by the Spanish comedy. It was also there Opera Buffa sprung out.
Through this crossbreed Commedia dell’Arte could keep developing, which might have been one of the reasons its heyday could last as long.

It was far and dangerous to travel. We know how Gelosi got kidnapped by Huguenots in 1577, but got ransomed by Henry III and how Fedeli lost an actor when traveling in France. I wasn’t just the danger of being robed. When traveling between countries and states one could never know how the authorities were going to respond where one came. War and disorder were frequent in the renaissance of Europe. But the most common danger was disease. Plague, cholera and other epidemics were widespread, and a sick actor could mean an economic catastrophe.
There were no small retinues that were out traveling, at least when it comes to the famous, rich groups. The actors traveled with their families that were usually very big. When Pier Maria Cecchini was looking for a job in the court in Mantua he tell of his family with wife, 10 children, his mother and servants. The great Commedia dell’Arte group probably looked like circus caravans when they came traveling.
On the other hand the travels could be lucrative, not only on arrival, but it also gave the possibility to play on the way. That was usually a necessity as the travels took a long time. We can also see many images of Commedia dell’Arte being played in smaller villages on the countryside, where it was just as popular.