Hearing about how the great Commedia dell’Arte groups trained and prepared their masks, we also hear a lot about how much they read (See example). It doesn’t necessarily mean that they used the texts on stage. It can just as well have been to learn from the style, metaphorical language and the tone they were written in and in that way use the written/learned way of speaking. Except from that we can once again point out that most of our sources come from the groups with better means who both could read and had access to books, we can also see how the theatre begins to glorify the written word and literature as something “finer” than movement and the expression of the body.
Among the most ridiculous examples of that from own time is when Swedish actors, up until the fifties, played Strindberg talking in a pronounced written language from the last turn of the century. They did that to venerate the author by not change in his text, while Strindberg himself definitely wanted his lines said in a spoken language.
Commedia dell’Arte was naturally still a physical form of theatre even among the big groups all the way up to the eighteens century. We can see that in lazzi, collections of burle and the rich material of images we have.
Among the about 800 scenari that are still preserved, the plot was mostly taken from Commedia Erudita, but much was also from popular traditions like fairytales and narrativetraditions, the dramatic exercises from the carnival, the diavolas etc. Therefore we cannot say if the scenari of Commedia dell’Arte was original (just as if Shakespeare’s plots ever were). Since there were no laws about copyrights, it was open to steal from other group and shows. In that way they develop each other’s ideas. The value of the shows was not in the plots or scenari, but in the actor’s performance.
That is also why the actors did not value a scenario as high as their own zimbaldoni, since it was more personal. Scenari could be used of others, changed or was printed for publishing, while an actor’s zimbaldone was his own repertoire book filled with personal lazzi, monologues concetti, burle and so on. It was also his livelihood with his unique collection of knowledge that was held secret for others.
It is also there where the actors found their ready rehearsed lazzi and so on, that they used in their shows. Most of those so mystified improvisation in Commedia dell’Arte performances are more to be seen as compositions of already prepared elements.

1601 is the year that Arlecchino is first mentioned in writing in France. It was written by Tristano Martinelli, who also played Arlecchino, in a pamphlet named: Compositions de Rhetorique. 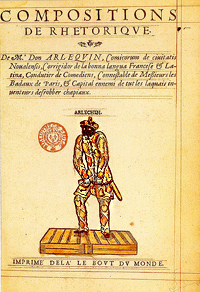 When talking about Commedia dell’Arte during its first years, no one mentioned the use of mask, even though we have lots of images that clearly shows the use mask. I seems as it was more or less obvious or that one did not make very much difference between the roles that wore mask and those who didn’t.
We would not know the name of Pier Maria Cecchini if he hadn’t published books. In all other sources about him he is only called Frittelino. Neither do we know the name of a certain Flaminia, who shows up in a lot of documents.
We must remember that the first Commedia dell’Arte actors did not just take over already existing masks. They also created them to their needs, from old traditions and by observe their contemporary. The mask was also created for the specific actors that first wore them, after their knowledge and talents.

The first scenari that was published was not meant to be a tool for actors, but for just reading. Those who published their scenari wanted to make money or a place for themselves in the literary world.