The masks in Commedia dell’Arte are, unlike Greek, Balinese or Japanese masks for instance, always half masks. They are not bigger than that they cover just the upper part of the face. They are not big enough to manifest themselves as icons, as images of humans, and not so big that they dehumanize them.
They can be clad in fur or hair, to mark eyebrows or different kinds of beards. 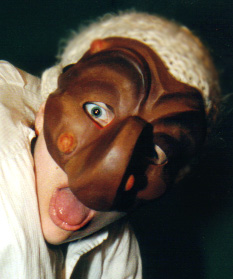 On can say that every Commedia dell’Arte mask contain three elements. These elements can serve as a springboard for the actor to continue searching to “finding his mask”:
The Character of the mask – that is its specific face feature, its color, its expression for the basic character traits the mask possessing.
An animal – every mask has its own animal from where it can find its origins, which must have its expression in the design of the mask, the movement and the behavior of the mask.
A devil – He indicates the special forms of devilment ( or cardinal sins) the mask represents.
By working with these elements the mask can at any given moment use the movement of the animal, behave devilish in his own manner or move the plot forward according to its character. 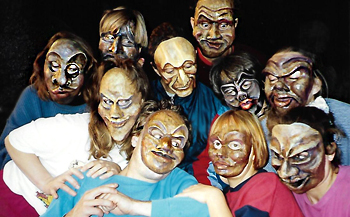 There is still a snobbism when it comes to leather masks, as the only possible masks to use. According to the myth it started already when Teatro Piccolo di Milano started to experiment with Commedia dell’Arte. Rehearsing “Arlecchino – Servitore di due Padroni”, Marcello Moretti first chosed to paint his face black instead of using a papier mâché mask, until he finaly got a leather mask from Amleto Sartori.
I can agree that a leather mask most of the time is a better tool for the actor, but a papier mâché mask is good enough. It can even sometimes be more effective as it has the advantage of being easier to form articulate. Papier mâché makes it easier to mark wrinkles and character traits. It also gives more freedom when painting. It makes it functioning better indoors in electric light. The argument that papier mâché masks hurt or are uncomfortable can be solved with a bit of rubber foam. Neither can we be sure that it was only leather masks used during the renaissance. The chance that a papier mâché mask would have survived to our days is not that big since to was made of a much more vulnerable material. Thinking of how few leather masks there are around today papier, mâché masks can very well have been used even if there are no masks left. If one goes to Venice one can see in any street window papier mâché masks being made from old traditional craftsmanship.
Other materials as birch bark, cloth, rope, leaves etc. we don’t know anything about. There is nothing that points to it, but nothing points the other way either. And there were probably no masks from wood or terracotta, since they would be too heavy to work in.
Most people discard material that doesn’t breathe as plastic materials such as fiberglass, latex, rubber or neoprene. Myself I think most of those materials are underestimated. They are waterproof (read: sweatproof), they are sustainable and they are easy to duplicate and form. The problem is that they don’t follow the actors face in a way that he can feel that that he is part of the mask or the mask is part of him.

We should not go in too much on the subject of mask making here. But a few practical things have to be said about the shaping of the mask. It is about the eyes. It is very important that they are seen and that one can see through the mask.
It is most important when playing indoors. In order to make it possible to get the light inte the eyes is it important to not do the eyebrow too big that they shade the eyes. If one raise the mask, as it is held when it is on ones face, it should be a free angle about 45o from the eye and upwards.
It is equally important that one can see one’s feet to see where one is on the stage, that sometimes aren’t bigger than 5-6 square meters. Therefor the cheeks cannot be too big or cannot be placed right under the eyes. 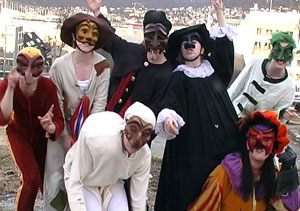 The costume is also a part of the mask. Every Commedia dell’Arte mask has its own costume. The costume, or at least parts of the costume, is also used to frame the mask.
It is easy to ”loose” the mask if one doesn’t think of what is around it like hats, hair, collars, scarfs and so on. The parts of the costume that is closest to the mask should lift the mask. In that way the whole face becomes a “picture”. For example: can we see how Arlecchino (when using pantyhose on his head) has a bit of cloth round his neck to frame the mask and the lower part of his face.
When we see someone acting in a mask dressed only in an unbuttoned jacket and no headdress it becomes a collision between two worlds, on one hand the mask and its grotesque fantasy world and on the other hand skin and its naked realism.
The costume can likewise be a part in the play. Therefore it is important to rehears in costume as early as possible. Pedrolino’s costume, for instance, has often too long arms. If the actor playing Pedrolino has the chance to, at an early stage, rehears in his costume he will also have the opportunity to invent lots of situations where he can use them and gradually they will play a part in the play. Or just think of Arlecchinos hat that can be used to almost anything, like: drinking water, hide things in, fight with and so on.
Stilts, swords, batocchi and other accessories and props that are hung or fastened to the costume are also part of the costume. They are also parts to bring in early in rehearsals, not only because one can invent ideas with them, but also since they are in the way for the actor who needs to find a way to deal with them.
Many of the male masks have, or had, phalluses on their costumes. That is a heritage from the ancient satyrs in the Dionysus plays. They could vary in size and shape after the characters of the masks, just like in Aristophanes play Thesmophoriazusae, were the old man in his confusion has his phallus hanging out under his tunic and give out a yell every time he sits down on it.