Commedia Erudita, just as Commedia dell’Arte, was very musical genre. It has also contributed to the birth of opera as an art form, with composers as Orazio Vecchi and Adriano Banchieri and even Alessandro Striggio and Giovanni Croce. As early as 1567 Alessandro Striggio wrote: “Il Cicalamento delle done al ducato” a comic cycle of madrigals without a sustained plot. Later in 1597 Orazio Vecchi wrote his L’Amfiparnaso. It is still not known how it was thought to be played even though it has a plot taken from a Commedia dell’Arte scenario. The prolog says: “… And the city where this story takes place is the great Theatre of the World; therefore everyone desires to hear it. But yet you should know that this spectacle of which I speak is seen in the mind, where it enters through the ear, and not through the eyes. But be silent, and instead of seeing, now listen.”
We also have Adriano Banchieri who wrote three full Commedia dell’Arte operas: La Piazza Senile (1600); Il Metamorfosi Musicale (1600); Il Zabaione Musicale (1603) and later La Saviezza Giovanile (1608).
There are also opera actors working with opera like Virginia Ramponi who had the lead role in Monteverdi’s Ariannna. 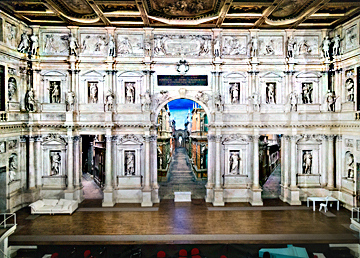 The Commedia Erudita shows were almost entirely played in the huge banquette halls in the castles and palaces. There were a few stages built for hosting Commedia Erudita shows, even a few built solely for Commedia dell’Arte. One of these where found in the Uffizi palace in Florence, another one was the Teatro all’antica in Sabbioneta that had statues of Commedia dell’Arte mask overlooking the stage.
We can thank the Commedia Erudita for much of modern theatre design, their shaping, the stage opening and the painted backgrounds. The stages represented usually a town square with entries to the houses of the persons on stage.
In 1585 was Andrea Palladio’s Teatro Olympico ready. It was Europe’s first indoor theatre, modeled from the old roman theatres with a stage full of statues of old noble men. It was not seen as a step forward in the development in stage design. It was more of a relic from the ancient Rome or early Commedia Erudita. When Palladio built his theatre the roman stage solutions was already abandoned.
Even though the courts was the most common stage for the comedies they were also played in such different places as bordellos and monasteries, the latter was probably more homiletic farces. Men where also not allowed in the nunneries.