As we know the word renaissance comes from French (and the historian and author Jules Michelets in 1855) and means rebirth, referring to principles from ancient Greece and Rome. That goes for the theatre as well, as an important part of the official life for the elite in Italy. They staged mostly comedies. For some reason there were not a lot of tragedies written in Italy compared to the rest of Europe. Great weddings between royal or noble families, state visits, crownings and other state activities demanded comedies. The show, whose simple message was just a celebration of life, fitted the rulers. By sponsoring the comedies the princes and nobles also demonstrated their devotion to humanistic culture and in that way showed off a sense of modernity, grandeur and authority to their court.
Groups of scholars tried to write plays in the classical style. It was common during the renaissance that learned scholars worked in very different fields as and also were artist, popular, carnivalistic comedy playwright or actors.
The actors and playwrights in the Commedia Erudita were always amateurs. Many of them were employed in the courts. They could use the theatre as a way to draw attention to themselves in the court where they served or from the rules. Among the playwrights at the time we can mention: Angelo Beolco, aka Ruzante (ca 1496 – 1542); Niccoló Machiavelli (1469–1527); Ludovico Ariosto (1474–1533) among others.
To start with they wrote and played new plays in Latin, but they also played the old classics. Pretty soon they started to write in Italian. The use of Latin in itself is proof that they turned to an educated audience and not a popular, as Commedia dell’Arte did. Even playwrights as Ruzante, whose plays took place among poor peasants and emaciated soldiers and is written in Padauan dialect, are written to an academic audience. 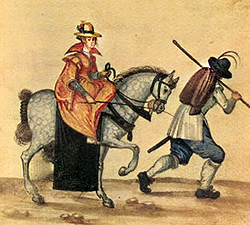 1428 Nicholaus Cusanus found 12 former unknown comedies by Plautus. This was a great impulse for Commedia Erudita. Gutenberg and the art of printing the spread these comedies and 8 more that were also found, together with six comedies by Terence. At the Italian courts and academies the structure and content were studied and soon they started to write comedies after the same formula. The comedies written during the renaissance is also usually more crude, brutal, disheveled and mere vulgar; for example do they contain much more adultery then their classic originals. But then the learned playwrights of the renaissance could not avoid to be influenced of the carnival with all its anarchistic pranks and joyous obscenities when they wrote the Commedia Erudita.
Other inspirations than Plautus and Terence where among others the roman mimes (ther are 7 complete texts from Herondas preserved), the satyr plays, the Phlyax plays, Attelan comedies, Philemon’s works and parts of plays by Menander. All these comedies had masks or stock characters. Another great inspiration was Boccaccio’s Decamerone. Whole love declamations were copied almost word by word, like in La Calandria, 1513, by Cardinal Bernardo Dovizi de Bibbiena.
The reason they started to write in Italian were hardly that they wanted to become popular among the common people rather that they wanted to create original works. However they started to print and give out Plautus and Terence to a broader public.
When we are reading the Commedia Erudita plays today – with their constant references to antic names and gods, their strict five act model, their use of room and time (not necessarily the action) – it is easy to think that they were competing in whom the most is learned. To write comedies was a way to manifest ones status in nobler circles.

The first thing they did was to print and copy the antic works that also started a need to stage them, wish in turn formed the need to create own works. Over time they also started to write in Italian.
One example on how a play has developed is – even though it was I France – the doctor Jacques Grévin wrote Les Ébahis (the Surprised) 1560 in French for Henry II of France after an original by Ètienne Jodelle from 1552 in Latin, that he in turn has stolen from Plautus.

In the beginning of the sixteenth century it aroused a great debate about if one should write in Tuscany (wish was the “classy” language that later became what we today call Italian), or in dialect (the dialects in Italy at the time), if one should write in verse or in prose and so on. Those who chosen to write in dialect did not write in just one dialect. For example in La Spagnolas (The Jumper) by Andrea Calmo (born 1510) the merchants spoke Venetian, a porter spoke Bergamasco, charcoal burner spoke German, a pedant tutor spoke Sicilian, a Dalmatian soldier spoke Spanish and modern Greek. Even though the playwrights did this to show off their knowledge before each other we can see an obvious model to Commedia dell’Arte, with all its dialects.