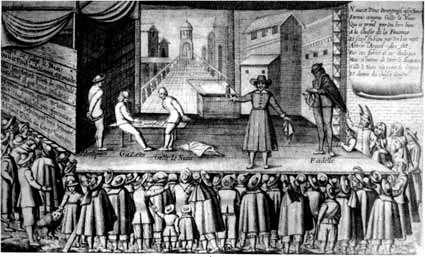 One thing more was that those who played Commedia Erudita, just as the English actors at the time (and long in to the nineteenth century), only got their own lines (and their cues) in the script, while the actors of Commedia dell’Arte always had the whole scenario at hand. This way they had an overview of the whole plot.

As Commedia dell’Arte grew more popular it also attracted more slanderers from scholarly circles. They wanted to see the Commedia dell’Arte actors as a band of tramps, without either pride or capability, who did not have any real knowledge but were con artists (quite like today in Sweden where the theatre establishment look at actors that have not gone to any of the four state theatre schools in Sweden in the much the same way). Commedia dell’Arte was not looked upon as less refined or advanced as Commedia Erudita. But the Commedia Erudita was also played and written by the courtiers themselves.
Even though Commedia Erudita was foremost literary theatre it was the acting that counted in Italy, not the written text. This tradition goes back all the way to the Greeks. Euripides and Aeschylus acted themselves in their plays since the acting was much better payed then the writing.
The great Commedia dell’Arte companies of the time were naturally never persecuted in the same way as those who played on the streets since they played in the castles and palaces for noble and dukes even for kings. Furthermore many of the actors were educated and from good families.
As an example we can look at this letter that describes a performance by the Gelosi at the wedding between the princess Christine of Lorraine and the grand duke of Tuscany Ferdinand Medici I in Florence 1589. It is Isabella Andreini’s great show-piece La Piazza d’Isabella:

“Meanwhile Isabela, finding herself deceived by Flavio’s snare, and not knowing how to remedy her misfortune, became wholly possessed by her grief, and thus dominated by her passion, and allowing herself to be consumed by rage and fury, was beside herself, and like a madwoman wandered through the city stopping now one person, now another, and speaking now in Spanish, now in Greek, now in Italian, and in many other languages, but always quite without sense. Among other things she began to speak in French, and also sing songs in the French manner, which gave such pleasure to the Most Serene Bride [the Dukes wife] that no one could have been more delighted. Then she began to imitate the ways of speaking of her fellow-actor – the way, that is, of Pantalone, Gratiano, Zanni, Pedrolino, Francatrippe, Burattino, Captain Cardone and Franceschina – in such a natural manner, and with so many fine emphases, that no words can express the quality and the skill of this woman.

The great groups of the Commedia dell’Arte were reminded also of the Commedia Erudita, and they did not just play comedies even though it was them they were famous for. Taste changed from one place to another and through the times. For example around 1570 Ferrara had an obsession for pastorals, while in Florence they preferred comedies and used willingly Commedia dell’Arte companies to do the comical intermissions in between acts in serious plays played by amateurs, and in Mantua, where they might have had their greatest income, it seems they did not have any preferences but liked all kinds of theatre.