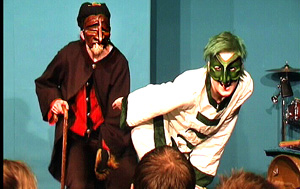 One of the most significant features of Vulgar Comedy is that it is played straight-in-your-face. Whether it is clowning, farce or standup comedy it is the kind of comedy that split sides, or at least it’s supposed to be. There are very few slow detections or witty wordplays in the genre.
One of the factors that create this is the frenzy that is part of the genre. The fast visual play, the physical comedy and the constant interaction with the audience are other parts that make the directness.
The play in Vulgar Comedy goes straight to our basic feelings through its physicality, both on stage and in the audience. In the physical acting there is nothing elegant or clever to first comprehend or any psychological sophisticationsto process in order to reach our feelings (See HERE).
The direct comedy does not give room for witty humor or “good taste” (See HERE) since it goes straight to the point. Paraphrases and softening of the content in a play are only obstacles that rasterizes and censures. 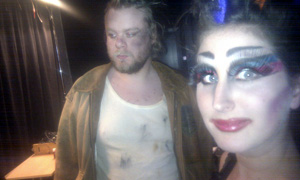 The direct comedy creates a sense of togetherness among the audience and the actors. It builds real cackling laughter and the laughter itself draws people together.
That feeling of community in Vulgar Comedy is originating from the very rudiments of theatre itself, before theatre could be divided in official and unofficial forms (See HERE). It might very well be one of the reasons we have kept playing theatre through the ages.

One Response to Direct comedy in Vulgar Comedy