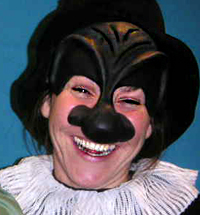 Here comes another prolog. It is a later text from Lo spirit delle maschere (The spirits of the masks) by Giueseppe Petrai written 1901. But it is a good example of a Dottore’s prolog.

“Do you laugh because I happened to stumble?
When I stumbled I could have hit my head. If I hit my head you would have called for a physician and he would have given me medicine and medicine is made out of drugs. Drugs are from the orient and from the orient are the philosophy of Aristoteles, who was the teacher to Alexander the Great and he was the sovereign of the world. The world that is supported by Atlas, Atlas who has tremendous strength and strength is what is used to erect the pillars that carry palaces. Palaces are being built by masons and they are following architect’s orders. Architects can draw; drawing is one of the liberal arts. The liberal arts are seven, seven are the Sages of Greece that are guarded by Minerva and she is a virgin. Justice is a virgin who is armed with a sword. The soldiers wear swords. Soldiers go out in wars. In wars one kills with bullets. There are bullets in the arms of Florence. Florence is the capitol of Tuscany where they talk beautifully. Cicero was the greatest of talkers; Cicero was a senator in Rome. Rome had twelve senators, twelve are the months of the year, and the year is divided in four seasons. Four are the elements; air, water, fire and earth. The earth is plowed by oxen, oxen have hides, hides are being tanned, and when it is tanned it becomes leather.  From leather one makes shoes. Shoes are worn on feet. Feet are for walking. When I walked in stumbled and stumbling I came in here. And here I am and I say: Good day!” 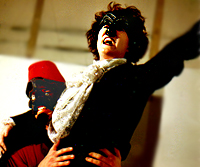