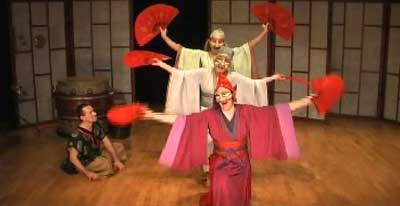 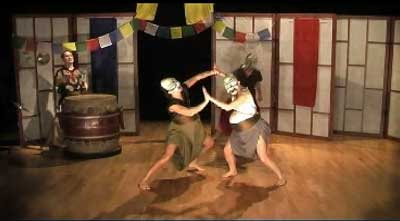 Eviga Berg is still in the repertoire at Teater Sláva. The performance had its opening 17/2-2007 and it has since then been played at schools and in Tonsalen the home of Teater Sláva. The target audience is first kids from about seven year old, but it works also fine for grown-ups

Eviga Berg is a performance built on en old Japanese folk tale. (I have also heard that it would be among the fairy tales that the Grim brothers where gathering.)
It is about a young sumo wrestler – Eviga Berg – who meats a family – a girl, her mother and her grandmother – on his way to the emperor’s great wrestling competition in the big city. Eviga Berg considers himself very strong, but he gets easily bitten up by each of the three women. The women decide to help Eviga Berg though.

After a year has gone by he is ready to go in to the big city to wrestle. It is just that he has fallen in love with the daughter in the house. But the family promises him to marry if he only comes back from the emperor’s great wrestling competition as a winner. Off course he wins and the young ones get each other.

The performance is a warm and humorous story about love and about to win ones humbleness. We are following Eviga Berg on his way from impertinent, impatient conceit to peaceful, patient gentleness, where also love has its place.
Eviga Berg is created on a physical and acrobatic narrative, with masks, shadow play and puppets. The music, with songs from the whole world, has been a very important element in the performance. 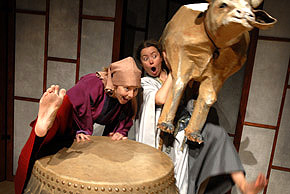