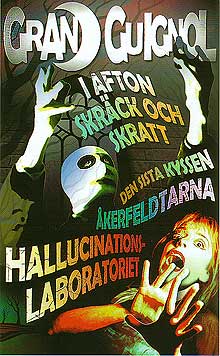 Click here to see a TRAILER from The Laboratory of Hallucinations 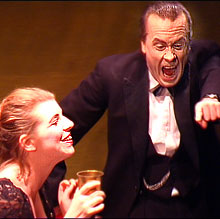 The performance was really three small performances, were I took part in two: The Cornfields and The Laboratory of Hallucinations.

In the beginning of September 2003 we played two shows, as a sneak preview in Kristinaladan in the north of Stockholm. Then, in January 2004, we played at Kilen in the Culture house in Stockholm for three weeks. The performances was organized by the Molière ensemble.

I played Mr Cornfield in ”The Cornfields” by Georges Courtelinne from 1918. It was a strictly psychopathic husband in a seriously dysfunctional marriage, where the husband and wife take turns to metaphorical and literally maltreat a parasiting visitor. The Play is a sort of brutal comedy with a twisted psychology, or as in Mel Gordons book ”The Grand Guignol” where it is placed under the headline: ”Suffering of the Innocent”.

In ”The Laboratory of Hallucinations” by André de Lorde from 1916, I played Mitchinn, a slight educationally subnormal sidekick to Dr Gorlitz, the diabolic doctor, who performs a lobotomy on his wife’s lover, when he meet with a car accident. It is all about jealousy, insanity, maiming and revenge in a performance that is more of a psychological thriller with a very bloody conclusion. 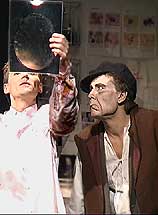 Grand Guignol
It is a French form of theatre from the second half of the 19th century. It is a sort of ”splatter theatre” where the foremost characteristics are terror and violence.
The name is from the Parisian theatre of Oscar Meteniers: ” Le Theatre du Grand Guignol”, that was located in Montmartre between 1897 and 1962. They played anything from thrilling criminal stories to sex comedies, but the basics in the repertoire were the horror performances. That is also what the genre is all about. A night at ”Le Theatre du Grand Guignol”, could consist of 6 to 10 small performances, alternating dramas of tension, macabre comedies and sheer orgies of violence, where plucked out eyes, acid baths, fried faces and spraying blood belong to normality in the form. It was common that people fainted during the performances and off and on the theatre even had a physician in the audience.
The genre was popular and it sprung from naturalism and the French melodrama. The gothic in the genre was more pointed to the naturalistic searching in the human inner depth in the spirit of Zola than to gothic monsters and ghosts. The plot concern instincts, death, sex, insanity, and deform absurdities. Grand Guignol was a great model for the expressionists and filmmakers that were later to come. It is a forerunner for horror film, which finally was the genre that ousted the Grand Guignol. 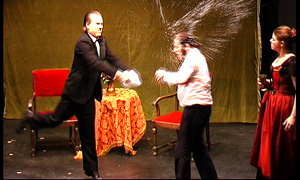 It was at a party in Stockholm that Michael Fields and Anna Svensson first talked me in to join the ensemble. I had just started to think about getting up on stage again and it was hard to find a better offer. I came both to work with Anna who I had been teacher and director to before and Michael who was my former teacher and director in the US. Besides the timing was perfect. I had time to learn the text and rehearse during the summer when I did not have to much to do. And it really became that eagerly longed for return to the stage.