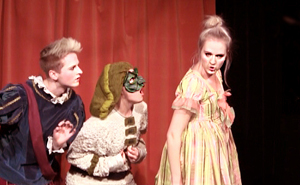 How much in a Commedia dell’Arte show during the renaissance that was improvised is something we will never know. What we know is that a lot was written down: lazzi, burle, some monologues and dialogs, battute, concetti and we can also read from some actors own notes. Commedia dell’Arte is also built on various disciplines such as music, dance, acrobatics, fencing and different circus skills that are impossible to improvise. But they never used ready scripts.

It is easy to understand, in our text based theatre world, that is the lack of scripts that have fed the myth about Commedia dell’Arte as a throughout improvised theatre form. Many scholars have speculated in how the eccentric idea come up to start improvising or playing theatre without having a text as base, as if theatre wasn’t born long before it was written down. (See HERE) Let us here and now determine that it is not a text that makes theatre and that it is not the absence of a text that creates improvisations. Or to recite Flaminio Scala from the prologue to Il finto marito, from 1619:

“For this reason, then, oration, or even locution, and words alone, have little to do with imitation, because even the smallest gesture at the right moment, and made with feeling, can achieve a greater effect than all the philosophy of Aristotle or the rhetoric or Demosthenes and Cicero.” 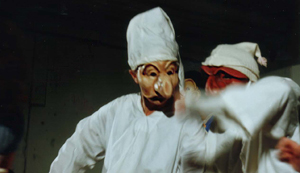 What we can be sure of is that it gave the notion that it was improvised, as all good theatre. That is something most theatre thinkers at the time agreed on, but then they were practitioners as well. Cecchini in his book from 1628 talks much about timing and coordination in building a play for example.
The theory about how much was improvised is that the actors composed already rehearsed and prepared parts in a play with in the frame of the scenario. It was made in a way so that the actor had the freedom to alter the parts he used in a play. We can also hold in mind that Cecchini and Perrucci both talked about how the improvising actor must have a good memory.
Plots, tricks and characters from literary and oral traditions were often stolen and put into different scenarios. Since originality was not the most important attribute for an artist to steal from other authors or groups was not looked upon as something particularly bad. Copyright was not invented yet. It could even be seen as an achievement to, in a refined way, steal and incorporate something already written or played.
It is not relevant for us here today to know how much was improvised to understand how to play Commedia dell’Arte today. We must find our own way in to the work or to quote Tim Fitzpatrik “actors – trained for their task – playing with a limited preparation”.

Continue to Part 2 or Part 3