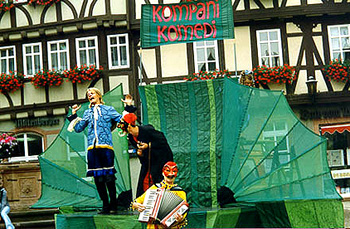 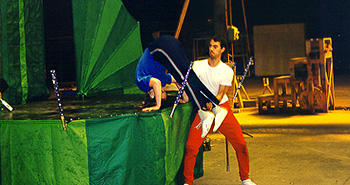 The history of Kompani Komedi started sometime around 1994 at the Theatrestudio, where I was teaching. The fall of 1994 I put up a Commedia dell´Arte show with a class. In the spring of 1995 the class asked me to direct two small shows. I did and the shows were played the summer that year. In the fall four of the (the now on) former students asked if we could keep up the work with Commedia dell´Arte. That was the fall that we started working together. In November the municipality of Vallentuna asked us to play two small shows.
That became the foundation of Kompani Komedi, who still is the only Commedia dell´Arte company in Sweden. Our first arrangement, that also became our kick-off, was an international workshop with the Italian Commedia dell´Arte company Teatro Immagine as early as the fall of 1995. That in its turn led us to a festival in Vicenza, Italy. The rest is history and the story is best told by our performances…
In Shows like:

Or at least that is right up until 2012. In the beginning of the millennia Kompani Komedi went to sleep. But since 2012 it has come back to life through a European Polytheatre project.