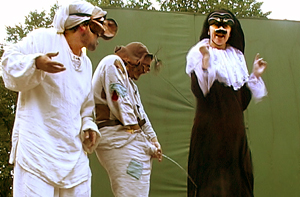 This might be the most known term in Commedia dell’Arte, though it is hardly known at all to those who are not involved in Commedia dell’Arte. It is not used anywhere else, but very often used in Commedia dell’Arte.
What the word really means or where it comes from is it no one that can say. Giacomo Oreglia suggests that it comes from azzi or azt which means action; John Rudlin, with the aid of Riccoboni, propose lacci that means tied and refers to that lazzi was supposed to bind the actions together on stage; Ducharte suggests even Italian business; in Mel Gordons book “Lazzi – the comic routines of Commedia dell’Arte” there are suggestions as: the Hebrew word lazson meaning trick or the Latin word lax meaning bluff.

If we stick to the significance today we mean a joke or a gag. It may be anything from just a word up till a running gag that continues the show through. It is the actors own jollification in the performance. It is an already rehearsed gag or routine that all the other actors on stage is well agreed upon. A mask can at any time start a lazzo. The other masks just have to be ready for it. Therefor has a lazzo never anything to do with the plot, and is unessential for it.
Or to use Riccoboni’s words:

“What we call lazzi is what Arlecchino or someone of the other masks does in the process of the play to show their fear, or tell a joke that is not within the subject of the play, because they do it constantly. Consequently what Italian actors call lazzi is the supplements they conjure the actors inspiration”

Today, on the other hand, we see a lot of lazzi written in to a scenario or even a script, as we see more and more scripted Commedia dell’Arte. Then the lazzi also often becomes a part of the plot. 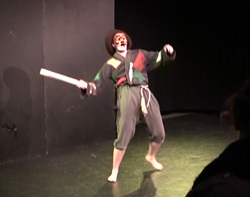 Let us look at some examples from Mel Gordon’s collection of early lazzi “Lazzi – the comic routines of the Commedia dell’Arte”. Since Commedia dell’Arte is not a literary form we may find them relatively boring to read. But that is not the meaning with them. It is first after working with them “on the floor” that we can understand them and see if they still work or not. One example by Adriani di Lucca from Perugia, 1734:

This lazzo is not immediately funny to read. We can see a few comical possibilities though: Gabba and Tristitia’s frenetic attempts to get an answer, Pulcinella trying to trick them or beg for breakfast, the repetition in absurdum is a comical possibility in itself and so on. But we will never find the full potential in a lazzo if we don’t work it on the floor.
When we only read it is hard to understand where the comedy is in a lazzo. Here is another example, from Venice, 1630:

“Confused by the other masks reactions on him, without knowing that the other masks have mistaken him for his double, Zanni is answering with an endless “I don’t believe it”.”

Is the comedy in the stupidity of Zanni or is it a word game, is it Zanni’s frustration that is funny or is it in the other masks reactions… Once again we have to try “on the floor”.

Here are a few more examples:

“Arlecchino becomes a living projectile, series of handsprings and somersaults that sends him like a catapult from one mask to the other.”
Giovan Domenico Bianclelli, Paris 1688
“The newborn Zannilet begins to beat everyone because he is hungry. By beating everyone Zanni demonstrates why Zannilet should not beat his father.”
Basilio Locatellis, Rome, 1618
“Isabella finds a sack, that contains the general. Depending on its hardness she speculate about the contains, for example millet or wheats.”
Antonio Passanti, Neaples, 1700

Also other repertoire monologues, not just Capitano’s bravura or Dottore’s scroloquio, which we can put in almost everywhere in a play, can be regarded as lazzi.

3 Responses to Lazzo in Commedia dell’Arte