Well, just as the name Vulgar Comedy indicates it is also vulgar, in both senses, obscene or crude and popular. That it is also called low has to do with the fact that the Church and the elite has always wanted to ban it, forbid it or at least diminish it, sense it is questioning and/or ignores authority . And the best way for them to do that is to come up with contumelies and taboos.
It has gone so far – as we shall see (HERE) – that we now disaffiliate from it ourselves. 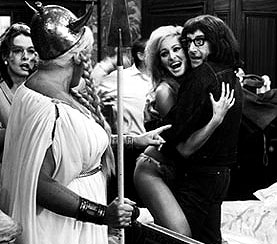 I have always been stunned by people who always condemn Vulgar Comedy because it is “low”, but then laugh hysterically to jokes about sex, violence or social rebellion. They seems to me like hypocrites who wants to been seen as “finer” or more morally superior than they are, but still they laugh at the same common hilarities.
The “low” represents much of a popular view on the world in the Renaissance and the Middle Ages, as Mikhail Bakhtin declares in his book “Rabelais and his World” (Read HERE).
He writes about “the material-bodily lower” (excuse the translation) he talks about how people perceived circular time, as opposed to the church that saw time as linear, going upwards and how life and death where measures of that circular time (See also HERE). Births, deaths, sex, eating, shiting – all kinds of bodily needs were in some way happy occasions as an homage to life itself. They indicated that life continued in another form.
For example when Pantalone or any other man of power, in a Commedia dell’Arte play or a farce,  loses or gets dethroned by the end of a play, he represents the old age that has to die in order to give birth to the new generations, represented by the young lovers.

Sex, shit, eating was funny. I fact, every human hole were considered funny. They were the openings to other worlds, to life and death (Read HERE). Our holes are where the limitations of the body cease. For example it has always been funnier if someone gets so scared they shit in their pants then if they don’t or to eat till they grow or explode.
That has to do with expanding the human body. The body grows out of itself and we expand. Most of us tent to like that feeling being “more” then we are, both in flesh and soul. We even use expressions like “to burst with laughter” or “having something pour out of ones ears”.

One Response to Low Comedy in Vulgar Comedy (Part 1)