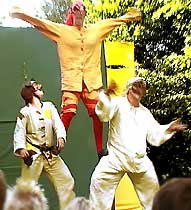 After all members in the group finished the Theatrestudio in 2002 it was time for their next show. That was a Commedia dell’Arte show. This is also where I come in. I wrote – together with Mattias Lindbladh – and directed Morens fånge (The Prisoner of the Moor), wish was the first performance in a planned ”three-stage rocket”. ”Morens fånge” was first played in Helge Ands (Holy Spirit) ruin in Visby before it went on tour further in the south of Sweden during late summer.

The next summer, 2003, it was time for me to direct another Commedia dell’Arte show: Det allra Löjligaste” (The Most Ridiculous). This time I wrote the show together with the whole group. Even ”Det allra Löjligaste” had its opening in Helge Ands ruin and continued on tour in the South of Sweden. 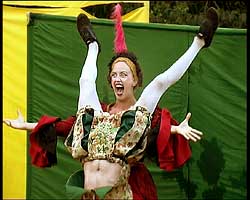 The last Commedia dell’Arte show in the ”three-stage rocket”, Allting på (Everything on…?), had its opening in Bottarvegården, in 2004, also located in the island of Gotland, where the show played for one month before it went on tour. ”Allting på” was also written and directed by me. It was rehearsed in Hallstavik and on Gotland.

3 Responses to Micke and Theatre Teatropen