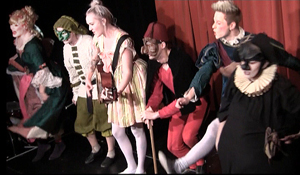 We can take in the audience in the performance either as an organism in itself or turn to different individuals in the audience. The show becomes a play between the audience and the masks on stage. In this play the both become both producers and consumers of the show.
There is a great difference between different audiences and they demand to be treated different. We can be assured that some of our prejudices will inure when it comes to differences in national stereotypes. That was something that Kompani Komedi experienced when we played AAARRGH!!! – Capitano Catastrofo Collosalle in Italy. As Swedes we were carful not to make anyone in the audience think that we would have them coming up on the stage and embarrass themselves. The Italians on the other hand took every chance they could see to come up on the stage with the actors. We learned pretty soon how to listen in an audience. After all its them we are going to play with.
But most audiences – at least in northern Europe – have a limit to how much they want to participate and we have to respect that. As I see it the limit is when the actors are exposing individuals in the audience. It is the actor how gets paid to show himself and his art, not the audience. It can destroy the whole experience for someone to be worrying about being dragged up on the stage or having an actor in his lap to embarrass him.
The audience is not prepared to act and is therefore in a weaker positon than usual. It is therefore a fastidious task for the actor to estimate how wants to and who doesn’t want to be a part of the performance. 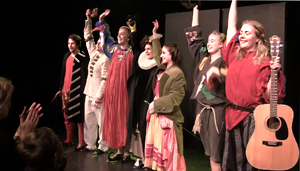 Off course there are also limits to how much we can let the audience to interact. There are always some drunk how wants to take over the show or parts of the audience becomes one big mass and their rhythm comes to control the performance. The agreement between the audience and the actors has to be on the actors conditions. If not: the focus risk to be moved into the audience and the actors won’t be able to deliver.
There are no rules for how to do it. We always have adapted to the situation.
Much is about rhythm, to create one where the audience feels comfortable and then adjust it to the needs of the show. It is a good piece of advice to early in the performance talk with the audience in a real dialog to help them into the show. Here is where a prologue has its place where we can use our intuition and sensitivity to scan what audience there is that night. No audience is like the other to use a worn phrase.
We must always assume that the audience is on our side, that they have come to have fun and that they are willing to help us create a good atmosphere around the show.

One Response to No 4:th wall in Commedia dell’Arte (Part 3)