Theatre started from the need and the lust of telling stories (See HERE). Maybe even before our language was fully developed (See more HERE). We can anyway be sure that theatre was played long before we started to write and definitely long before anyone came up with the idea of writing a play.
Therefore it is quite funny to see how some actors, directors and theatre theoreticians keep referring to the author of a play and his or her ideas as the guideline in how to stage a play. As if it was theatre and not literature that was the art of the author. 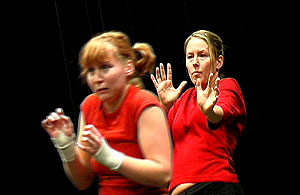 As Vulgar Comedy is sprung from – and still very close to – the earliest forms of theatre, it is also still based on nonliterary storytelling. When it comes from verbal sources it comes from oral tradition, just like most of our early literary masterpieces, such as the Bible, the Mahabharata, the Iliad and the Odyssey, Inanna, the Epic of Gilgamesh and many, many more. Those stories were first told long before anyone started to write them down.
Many times the stories in Vulgar Comedy are originally born out of pagan rituals instead. They have developed out of function, out of a dance for rain, a dramatic game to celebrate a good hunt, a sacrifice ritual for fertility and so on. The stories were acted out at big feasts and told the story of the world and its early religion.
Some of these rituals developed in to theatre and Vulgar Comedy and some stayed as rituals.
All this early theatre and rituals were played as collective, happy occasions. The rituals were part of feasts and celebrations. Those early theatrical experiments manifested the festivities by visualizing their contents.
It is from these visualized festivities that Vulgar Comedy is sprung and very much of the happy party feeling is still there. (See HERE)

One Response to Nonliterary storytelling in Vulgar Comedy