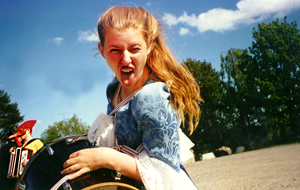 A common convention in Commedia dell’Arte, with very old ancestries, is the habit of mock and parody other groups and colleagues. This tradition goes back to the times when several groups were performing from their carts and wagons at the same time in the same square. It wasn’t enough tobe the best on the square, it was equally important to, with every trick, gather the biggest crowd. Therefor they tried, as every politician is doing, to look better by making the other groups look worse.
It wasn’t just the groups that played in the streets and squares, all groups, even those famous ones that played in the courts, mocked their competitors and colleagues. We cannot know today in what degree of gravity or how much it was just for fun during the renaissance. We can however assume, in the view of the malignant letters that are preserved, that it was not only for fun. 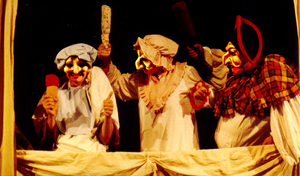 When we are taking up this tradition today we run into a couple of problems. First of all: there are not that many groups to parody, at least not enough for the audience to have seen them and are able to relate to them. As compensation we have TV series, commercials and Hollywood. It does not give the same feeling of intimacy when we are not referring in the same genre, with the same conventions and masks, and not the same jokes in another variation as it once was. A Pantalone mocking another Pantalone is naturally more intimate than if he mocks JR Ewing. 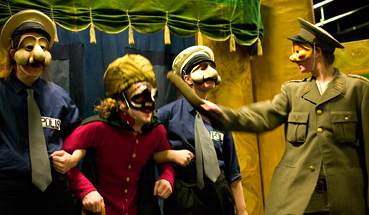 Secondly hypocrisy have gotten so incorporated in the culture of today that it if we openly show competition or rivalry to other groups on stage the audiences would feel uncomfortable, even if most of them would see the parody for what it is, not thinking that they need to take sides in a conflict. Another possible reaction is that the audience would think of the group playing that they are just envious and grudging. This is kittle as the relation between the masks and the audience in Commedia dell’Arte has to be one of mutual sympathy.
I see the convention of parodying other groups too tricky to really be used today, if it is not done with obvious love to the group we parody or if the audience is on our side and am able to understand the convention.

2 Responses to Parody in Commedia dell’Arte