It is not just because Vulgar Comedy originally played for an audience that could not read that most of it is based on a physical, visual theatre. It has more to do about effectiveness in the storytelling. Just like in TV-series which is made to attract people’s interest immediately Vulgar Comedy uses the image and the physical movements to let people in to the plot or action without having to first find out what is going on.
The physical acting attracts the audience to stay and to follow what is going on. Very often it is also very fast, nailing the public to the action.
The reason for this is that most Vulgar Comedy is sprung from a tradition of street theatre where the actors had to fight for the attention. Later it played in places where alcohol was served, which was a great part of the experience for the public. 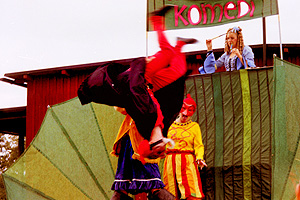 Except from the physical storytelling in Vulgar Comedy it never made any difference between circus arts and theatre. Therefore disciplines as acrobatics, stilt walking, dance, stage fighting and other physical tricks have always been a part of the genre. As a matter of fact all scenic disciplines have a place in Vulgar Comedy, magic tricks as well as arias.
They lift the performance and deepen it in the same way as music or stage craft can do and they can very well be a part of the plot or the narration of it as well. (See HERE) The fact that including disciplines in the performance are dealing with reality, in the sense that an acrobat actually can fall or a trick may fail, intensifies the experience for the audience.

Maybe we developed theatre even before we developed a full language. When a group of hunters came back after killing a mammoth they might have wanted to tell the village about their hunt. If it was so they would have to develop an early form of physical theatre in order to explain and dramatizes their hunt. It is anyway very unlikely that theatre sprung out of an out of a literary or even verbal storytelling. The need of showing what one are not sure one’s listener can see in front of them leads naturally to physical action.