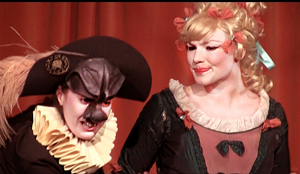 When playing indoors some things work a little different. Lightning for instance has to be as “flat” as possible, meaning that the ligthning has to be coming from a low point. That is to have the eyes of the mask lightened. Outdoors that is not as important as the light is reflecting much more directions. Therefore there also are more shadows indoors to aware of. Likewise we have to be careful with hats with wide brims that shadows the eyes of the masks if the light don’t hits them in the right angle.
Another way to solve the problem is to use footlights. It also gives an old-fashioned atmosphere to the show. In that sense we can say it is the same as outdoors – “the less you see the audience, the better the audience sees you”.

We cannot completely shut the houselights. Even though it is hard to see the audience as just mentioned, we must try to see them as much as possible. We must have in mind that the audience plays a part in Commedia dell’Arte. We are talking with them, not to them.

Also when we are playing indoors we should try to have the stage elevated so that the masks acts above the audience. It will give the masks a stronger authority as they are “bigger” when seen from a perspective below the stage. All at the same time as it gives the actors an overview of the spectators. 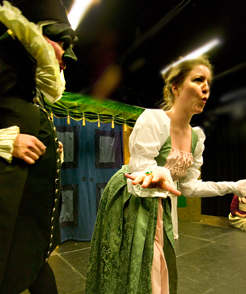 Even when playing Commedia dell’Arte in indoors the genre is street theatre, but it gives us the opportunity to not be so strict about the “rules of the street”. For example we can allow us to have quiet moments, and even private moments on stage. In a room with  no distracions there is even possible to make the plot more complex and and wordbased when the energy level of street theatre is not nececary anymore.
Just don’t fall into the trap of start trying to make Commedia dell’Arte into litterery or even psychological comedy.

See also:
THE OFFICIAL THEATRE
THE MASK AND THE ACTOR
TRAINING FOR PHYSICAL THEATRE