There is not much psychology in Vulgar Comedy. Psychology in theatre is much related to literary theatre. Since Vulgar Comedy has its roots in rituals and oral storytelling – which is too atavistic to give room for psychology – it is not about psychology, especially not in a personal sense.
The comedy rather comes from screwed situation, unusual, surprising perspectives, caricatures and distorted or exaggerated characters. 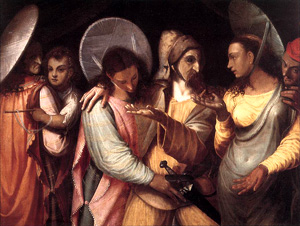 Off course there is no way we can stay out of psychology totally. But the psychology is more of collective nature, both in the sense that it is about what happens on stage all characters together that makes the psychology and also because it deals more with social issues.
In the first case Commedia dell’Arte is a god example where each character contains only a few aspects of the world, driven only from their own needs and passions, but where the entire performance makes a complete world where the mixture of passions and instincts makes a sort of collective psychology (Read more HERE and HERE).
In the second sense we must think of how much closer Vulgar Comedy stands to its origins that many other kinds of theatre do. It comes from a very collective society where most things where done together. (As a matter of fact, it was often even a tragic thing to have to go to the toilette alone and many outhouses were built for more the one person to sit.) The private life was extremely limited. Therefore it didn’t, and still doesn’t, matter much in Vulgar Comedy. 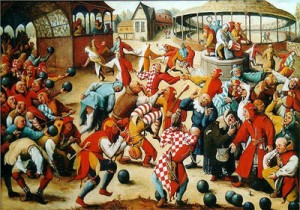 The lack of individual psychology doesn’t mean that Vulgar Comedy is less deep then literary theatre. Many people think so. As if the joy of life, collective ceremonies or alternative analyses of society would be more shallow then individual, self-reflecting psychology.
There is also the misunderstanding that mixes up complexity with depth. As the ambivalence in Vulgar Comedy is not in the characters but in the actions, which makes them cruder and more straightforward, it is easy to think that their obsessions and needs are not as deep as the passions and desires of other theatrical genres.

One Response to Psychology in Vulgar Comedy