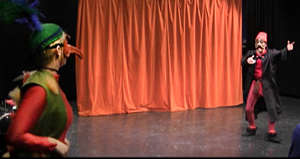 The show is a classic Commedia dell’Arte, with of lots of play, lots of audience participation and some acrobatics. It was the first production for the students. We focused much on finding the play with the masks and the Commedia dell’Arte attitude.
The plot is based on the Signora who seeks seduce Flavio just as Flavia enters and misunderstands the situation. Then Capitano enters also wanting Signora, but gets caught by Pantalone who is looking for Signora who has been buying to much clothes. And so on… 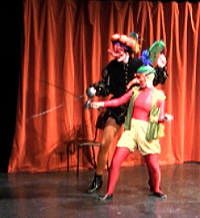