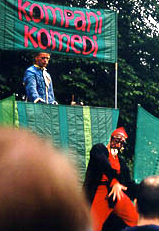 It’s important to be seen when playing on the street. Therefore we must be big and distinct in movement. We must always make sure that we communicate on such a large distance that we, not only attract audiences to come forward, but also to make them laugh. We bend our bodies in extreme positions and there we move in exaggerated versions of normal movements to be more obvious at great distances. It is not just to be clear and distinct that we take out our movements to a maximum, but first of all is because the mask demands it of us. For our bodies to play “in the same world” as the mask, with its exaggerated face features, they have to use movements and poses big enough to match the mask. 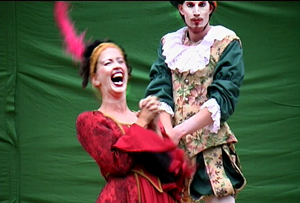 It is not just because of the image of a Commedia dell’Arte performance that the actors work extremely big. It also has to do with how we, the audience, receive the performance. We don’t just see the clear, huge gestures and large movements. We also perceive the qualities and power through the actor’s muscles, not just through their intellect and mentality. It enhances the power and the motion of the acting on stage. As an audience our everyday fears and become absorbed by the actor’s vitality and energy that meet us. We ourselves become part of the creativity that flows against us since the language of the body does not pass through the filters of the brain.
This can be perceived as frightening or intimidating in a society where we are used to hide our bodily expressions. All of a sudden we react intuitive and animal like on what is happening on stage. It is out of this fear one of the strongest criticism of Commedia dell’Arte, and Vulgar Comedy too, grows.
Commedia dell’Arte is first and foremost street theatre and the acting style has developed out of this. Therefore Commedia dell’Arte is based on visual ways of expression and narrating. On the street it is, all the time, important to use big gestures and movements and to be distinctly visual in narrating. 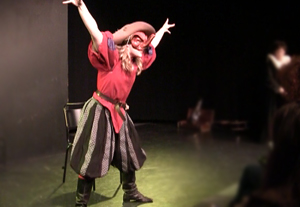 One of my favorite expressions when I direct a Commedia dell’Arte piece is: “I can’t see what you say” I have been told. I it might be something that… It is not just because it is a part of the genera itself as the visual understanding is important. A spectator on the street usually just gives a show a glimpse to see if he likes the show or not. He has no time for listening to the lines to try to understand the plot. But he has time to take in a picture from the show. It is therefore important that we always create a picture that tells what is going on, on stage. When the psychological actor looks for memories or emotions to find the character, or when the intellectual actor uses the text to find underlying metaphors. Then the physical Commedia dell’Arte actor looks for pictures for what is happening to the masks, they want and think. In that way they move the plot forward and externalize their impressions visually.

One Response to Size and visual narrating