Commedia dell’Arte can very well be played without words, but never without sound, not even for a short moment. That is because it is street theatre.
Sound has the ability to draw attention to it. I usually do an experiment in class when I teach Commedia dell’Arte. I focus the class on a spot on the wall, something outside the window or just the back wall. When everyone is looking I clap my hands or make some kind of noise behind their backs. Suddenly everyone turn around facing the sound. But if I make the same clap or noise when the class is watching a video or they are focusing on something that has a sound they will not turn around if, off course, the sound of the noise is not too loud.
Naturally this also applies to Commedia dell’Arte when played on the street. A dog’s bark, an engine’s roar, any sound will draw the attention from the show. The antidote is to constantly make some sort of sound from the stage to keep the attention there. And as said it doesn’t have to be talking. It can very well be voice illustrations, sound effects etc.

Sound effects are a very effect full tool for Commedia dell’Arte that is nowadays used more and more. What we are talking about is the kind of sound effects that follows a movement, high lightens a fall etc. It seems to have come as an influence from cartoons that use it in the same way.
With the help of sound effects we can easily pronouns the rhythm in a physical or acrobatic segment, help us give the feeling of prolonging an arm or a leg or just make simple movements look more spectacular. 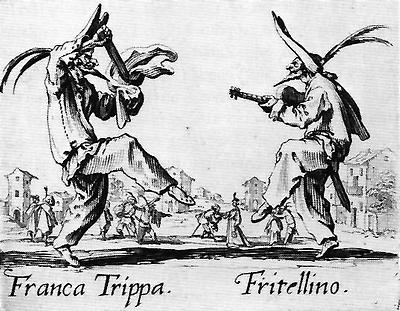 There is usually a small music stand beside the stage. There are instruments stored when they are not used on stage and there are also the sound effects made. A common basic set of instruments could be three drums in different sizes, a crash cymbal, a triangle, a “push-and-pull-flute” and a rattle. On top of that it can be filled with as much instruments as one needs.

2 Responses to Sound and sound effects