Spex is a very Scandinavian form of Vulgar Comedy. It only exists in Sweden and Finland. The word itself is nineteenth century slang for spectacle (spektakel in Swedish).
It started in the Swedish universities around 1850 as a parody of the Greek and Latin dramas the students had to read. It is still only played at universities and just once a year. Every university in Sweden with any self-respect has one. 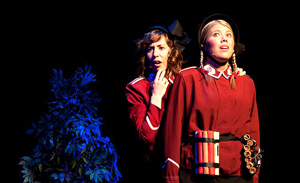 The plot is often taken from an extremely anachronistic historical episode or person, like “Victoria – the lady without lower part of the body”, “Pompeii – or an unpleasant surprise” or “Oedipus a complex story”.  It is for instance most natural to put Julian Assange in a spex about Mata Hari.
There is also always lots of musical numbers and usually a big orcestra. Specially drinking songs are very popular, like THIS ONE.
Nowadays, it has become very popular to add film clips in the show, such as THIS about August Strindberg’s inferno crisis or THIS about police.
But what really makes a spex is the concept of “replay” (or “omtag” in Swedish). It means that the audience can always shout “omtag” it they like one part, line, sequence or song.  Then the actors have to do it again, this time in another way. A “replay” can also be followed by words like: backwards, in French, lying down, more (of whatever the actor is doing), sad, as Hillery Clinton and so on. Of course it forces the actor to play it that way.
The audience can also just shout slower, faster, louder, more heartbroken, happier as well. Then the actors just continue acting after the directions. 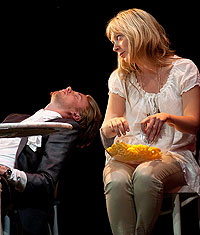 From a historical perspective it is interesting since it combines Commedia Erudita with Vulgar Comedy, in the same way as it was done in the time of the birth of Commedia dell’Arte.