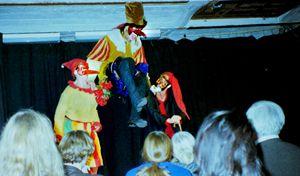 The masks neither can nor want to limit themselves by law, morals or common sense.  The masks are here mirroring themselves mainly in actions of unmatched stupidity, or driven by monumental lust or hunger, or blissfully unknowing about rules and ideas of moral.

Even if morose delectation or disability humor not is anything strange or inappropriate in Commedia dell’Arte it would be too easy to say that we only enjoy laughing at blockheads just to feel superior to them. This is instead a continuing from the entourage of the King of Carnival and the devils from the diavolas of the medieval miracle plays. Those masks have their origins in devils, spirits and creatures from the underworld, coming back up to, in their stubbornness, help the world to give birth to another year. It is the pigheaded stupidity that is the stubbornness that upholds life against all including death himself. 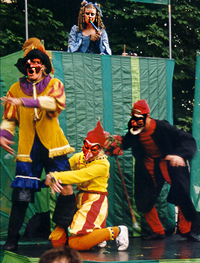 Stupidity in all its lewdness often transcend to pure animal behavior, which in in itself is totally immoral. This is an immorality that doesn’t come from malice or greediness, but the inability to follow moral rules and patterns. Or to quote Pompey Bum:
“It is not more evil than a dog that overturns a garbage can is evil; they are not self-                     conscious in their embodiment of nature, which refuses to become castrated and                           flattened.” 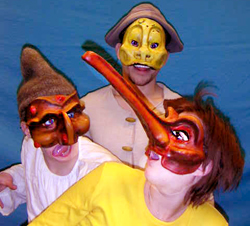 It is common that the more stupid the masks are, such as Pulcinella, Tartaglia or Coviello, the more physically deformed they are. It is like their deformed train of thought takes physical form. It seems that that is more right for the masks that have their origin in southern Italy. The physical deformities are a great part of how the mask is played, but they don’t do very much to the plots more than in one or two scenes.