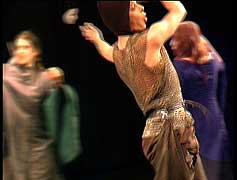 This was a show based on anything from the texts of Antonin Artaud about the plague and suicide, ”Singoalla” by Viktor Rydberg and ”Trämålning” by Ingmar Bergman to ”The Great Death” by Dick Harrison and Gabriele de´Mussis’s texts.

It was made with the students at the Theatre Studio in 2005.
We worked a lot with music and we mixed different styles of play in the performance. The performance did not lack humor, but it is the throughout darkest show I have made at the Theatrestudio. It started as a search for the plague in drama and literature, but ended up in a performance about our fear of death and our inability to really live life. I put up The Black Death in the spring off 2003. 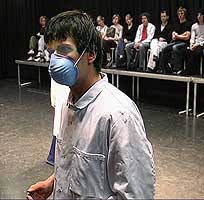