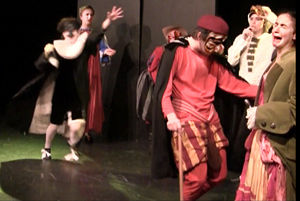 Commedia dell’Arte is always fast, it is always moving forward and there are no dead moments in it. Except from the fact that it is comedy and it requires a comedy tempo, it is a consequence of that it is street theatre. No dead moments can be allowed in the streets. There is always too much happening around the stage that competes with the action on the stage. Kids and dogs are playing; cars are driving by or drunks that fight. If we, from the stage, give up our focus to them we have to either work hard to take it back or it will simply disperse. And we give them the focus as soon as we leave a dead moment on the stage.
It is important that the masks constantly move the action forward and not get stuck even when they are standing still, repeating themselves or waiting for other masks to get ready with whatever they are doing. In the moment the audience can figure out what will happen next they will lose interest and give their focus to the street scene instead.

If we play indoors we naturally don’t have that problem when people have paid for their seats and there are no distractions around. But still: it is Commedia dell’Arte we are playing and it has its roots in street theatre. Even if we have the possibility to adapt to the situation when we play indoors (and we have to, or it will be a sort of running-and-screaming-and-waving-arms-in-the-air-theatre) so that we don’t play an energy level designed for realistic/psychological theatre. Commedia dell’Arte is still high energy theatre. 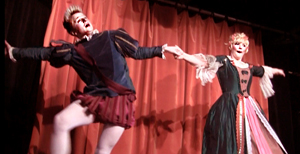 This style of acting also demands an unusually rapid tempo so that the big gestures and movements and distinct pictures not shall perceived as stupid, over exaggerated children’s theatre. We also have to bear in mind that Commedia dell’Arte is Vulgar Comedy and that a sense of frenzy always is a part of what makes up the genre.

The actor on the other hand must not think too much about tempo. He should be thinking in terms of rhythm, which is much more useful to him. There is always a risk that tempo gets confused with stress if we don’t instead speak of rhythm. We can always start rehearsing in a slow rhythm and then increase it as we go along, but we cannot be speaking of tempo and speed. It only confuses the actors.