The church censoring Commedia dell’Arte (2 of 2)

The defense of Commedia dell’Arte was foremost the idea that it was an edifying source of moral learning both social and on a personal level, instead of attracting to sin. It exposed the folly, the gluttony, the excesses, the hypocrites and the misers to public mockery. A devout person could not possible be attracted to that…
Commedia dell’Arte could not reasonably be morally objectionable since the elite saw it and laughed. Besides at least three of the dukes of Mantua acted in Commedia dell’Arte plays together with the players. Since they did not lose their good reputation by playing theatre, how could the professional actors do so who had the knowledge.

The men from the church were also afraid that the Commedia dell’Arte groups would ridicule the church itself in the same way that jester and minstrels had been able to do earlier. Here is a letter to the censors that were supposed to examine all scenari that the Uniti were given permission to play all over Milan in 1596:

“These players, each and every one of them in their plays, must in no way be permitted to use vestments pertaining to the priesthood nor any other religious, nor use garments of any kind, nor anything similar to them.
They must not speak in any way of Holy Writ, nor of subject matter contained therein – that is, of anything pertaining to religion and the ecclesiastical state – nor use particular language of the Holy Sacraments of the Church, nor employ words or topics of ambiguous interpretation concerning matters bearing on the Holy Catholic faith, not treat things which might breed superstition in the minds of simple auditors, nor invoke spells or any like evil. […] they must not perform any play the soggetto of which has not been seen and approved by at least one of you two delegates.

One thing that is easy to foresee in our secular society is the fact that, even if the church was a great power-broker and probably not very loved, most people were deeply religious. To many people religion were the only hope of a better life (if not in this world so in the afterlife). As a parallel we can look at the Iran, Israel or the American mid-west of today, where mockery of the Coran, the Tora or the Bible very well can lead to huge protests and even violence. 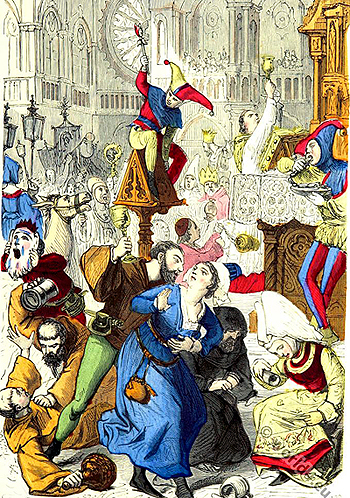 Anyhow, the church did not have the power to alone forbid the Commedia dell’Arte, whether it was played in the streets, in a stanze or in one of the palaces. It was the state or the duke himself who had that power. The defended the theatre, not only to glorify themselves, but also in the struggle between the church and the worldly power. We can see how the greatest noble families, like the Gonzagas, the Medici, the Farnese, also were the greatest theatre lovers.
They also needed the approval of the people in order to avoid revolts. ”Bread and circuses” has always been a classic way to keep the people in place.
At the same time it is hard to believe that it was only the lower classes that saw and enjoyed Commedia dell’Arte when played in the streets. Many of the young princes and the clerks had taken parts in Commedia dell’Arte shows. So why should they not be interested?