The language of the marketplace 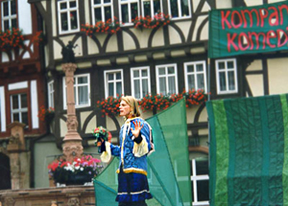 A street vendor starts to call out his products in the square. The peddler in the booth beside him starts to yell out his products even louder in order to be heard and get anything sold. It works well. A third peddler joins the choir of shouting sellers.
This was, in the renaissance and the medieval ages, what Bachtin calls the language of the marketplace. It was a highly refined language where every guild had its own melody and rhythm to promote their products.
In Paris this noisy, swashbuckling language had its own name: “Cris de Paris”, the screams from Paris. It also gave birth to a play: “Farce de cris de Paris” and a seventeen century painting called Cris de Paris” by Abraham Boss showing street vendors.

In this loud, even if primitive, media noise, which literally bombards every thinkable costumer with oral advertising in different rhythms and melodies, one peddler understands that he has to do something extra to attract customers to his booth. This is when he starts to entertain his costumers, who now slowly becomes his audience. Others follows. Someone starts telling funny stories, someone else starts to sing songs, and another one hires jesters, while someone starts juggling their sausages.

The squares and markets at the time there had an unofficial character and a freedom that gave the common man the right to express themselves more free that in the official world (in church, with superiors, at the power). The square had its own lingo, filled with profanity and curses, comical insults and praises. The language of the square was also always doubtful, “they praise when they curse and they curse when they praise”, and one of them are always ready to transcend into the other.
As an example of the language of the marketplace we can see Panurge by Rabelais when he curses all the humdrums that criticizes the wine of the joyous truth and urinates in the barrel: 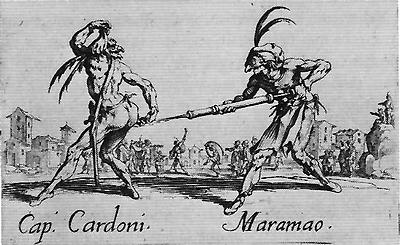 The everyday and the artistic genres of the marketplace was often so tight knitted together that it was hard to see what was spontaneous scenes and what was organized performances.

5 Responses to The language of the marketplace