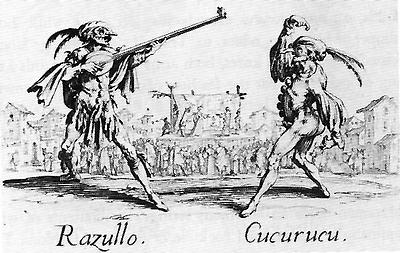 Even if the more famous Commedia dell’Arte groups had an easier life the life of the actors were not always worth very much in the eyes of the rulers.  Here is a letter from Rome, reporting about when the Gelosi visited the Duke of Mantua, Vincenzo Gonzaga, in the 28:th of July 1582:

“Although I have not heard this from Mantua, nonetheless it is said here that the Duke desired to see a comedy by the Gelosi that was altogether ridiculous and farcical. So the players obeyed him by staging a very absurd and ingenious one in which all the performers were hunchbacks.  His Highness laughed enormously at it, and was altogether delighted with it. When the entertainment was over he summoned the leading players and asked which one of the devised it. Zanni said I did, I did; the Magnifico claimed he had; and the Gratiano too sought the palm; each assumed he would get a rich reward. But the Duke had the three arrested, and they were condemned to be hanged. All the gentlewomen of Mantua banded together and begged for the players to be pardoned, but without success. The most they obtained was permission to make the ropes in their own fashion. These ropes were made of such rotten cord that all the players fell to the ground, and the city cried out pardon, pardon. But although the poor wretches were taken to prison half naked, and were shaven and bloody, nonetheless the Duke was still determined they should be hanged once more. And this story I have from a good source, although not from those regions.”

From the even less fortunate Commedia dell’Arte groups, that was submitted to play on the street or in rented stanze for common people, we have naturally less written information. Although they were popular amongst the people, what we have written about them is attacks and hostile criticism, most often from the church. What we have is pictorial material, images from the market or the Carnival etcetera.

“But those profane players who pervert the ancient art, introducing into play only untruths and scurrilities, cannot be allowed to escape blame for bringing shame on themselves and the art of acting with the dirty rubbish that flows from their mouths with every word. To the extent that the art of comedy has benefited from the afore-mentioned [Isabella Andreini, Vittoria Piissimi etc.] to an even greater extent has been besmirched by these people who, along with Aretino and Franco, have perverted the language in order to argue in a way as dirty and offensive as they are themselves. In their actions they have less civility then asses, in their gestures they are unmitigated ruffians, in their language they display the effrontery of common prostitutes, in their inventions they are wholly villainous and in everything they do you can smell the scoundrel; and where they occasionally they could handle the subject in an appropriate manner, they seem think it better to it better to express things in a distorted way, or to twist everything to their own style. […]

Naturally the less well-to-do groups did not have the same possibilities to work with nuances when playing on the streets and markets. In the marketplace it was also often more than one stage at the time competing for the audience’s attention. Their style became, by necessity, less sophisticated and less verbal faceted. Instead they had to use other skills (See Acting style in Commedia dell’Arte).
When Zan Bragetta played in Avignon 1598, they first played in a hired stanze where they played pastorals, which, by the way, seem to have been just as comical and physical brilliant as the comedies. But after a while they moved out on the streets and there the performances become more of Charlatano shows. 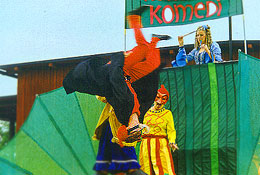 We should not in any way think of the poorer groups as inferior or less talented then their more successful colleagues, even though we want to believe that it is the best artists that become the most successful. It is rather that they played a more popular, more burlesque, rougher and more physical Commedia dell’Arte, which attracted common people instead of more learned and powerful audiences. They played and developed a style of Commedia dell’Arte that has its origins in the Carnival and from the marketplace, while the more famous groups draw closer to Commedia Erudita and literary theatre instead.
These poorer groups could occasionally have played at provincial courts and for the local bourgeois, but they for the most part depended on the common people. They had to face suspicious and hostile officials, who looked on Commedia dell’Arte as a threat to order and moral, when they applied for permission to play on the squares and rented stanze.
Those paltry Commedia dell’Arte groups, who almost always were contemned, could also be called dispraised names like: saltimbanchi, charlatani, cerratani eller trufaldini. They were, as gypsies were, seen as rough, layabout thieves, and the women were seen just above whores.
With their constant travelling, suspect subsistence, and hand-to-mouth-economy there were no place for them in the conventional society. They had to form their own communities, where they travelled, worked and lived together often in their whole life and even in generations. They were sometimes accepted by local authorities in smaller communities, especially in bigger countries like France where the king did not have the same survey.

Not just the acting craft, but also the mask they played was inherited (Even though the children to the rich and famous actors had their university education payed for by their lords). It seems that they were relatively happy with their lives as actors anyway, or as Domenico Bruni wrote in his Le Fatche Comiche, 1623:

“As my companion Farfanicchio used to say, if you got a profession you’ve got a position in the world. But patience! I’m stuck with it, and in this trade if you are in it long enough to wear out a pair of boots, then you are in it for good.”

Even though the not so well-to-do Commedia dell’Arte groups were not accepted by the authorities they were loved by the people.
It didn’t work very well for the rougher, folksier groups to play in a more refined way. In the same way the more verbal sophisticated groups did not make much success in Europe, except when playing in the courts and for the learned. Commedia dell’Arte became more farcicaland burlesque abroad, or when Luigi Riccoboni writes in his Historie du Téâtre Italien from 1728 about how the Italian groups came to France in 1716 with their more sophisticated Commedia dell’Arte to a French audience who didn’t understand the language and wanted farce and slap-stick.


See also:
The Origins of Mask
Parody in Commedia dell’Arte
En Herrgårdssägen (A Tale of a Manor)