The theatre spaces in the heydays of Commedia dell’Arte 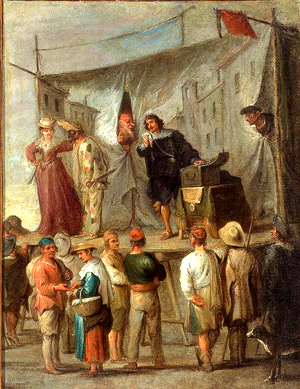 People went to the theatre of quite other reasons, socially and culturally, all the way up to the nineteenth century. First of all: the lights were not turned down in the auditorium. It was first in the middle of the nineteenth century that Richard Wagner started to shut the light in the auditorium in order for the audience to focus on the play on stage. The audience was not necessarily there to just sit and watch. It was more a place for social interaction as a place to witch a play. Wine was served; the boxes were furnished with drapery so one could avoid being disturbed by the play when courting their mistresses. An adequate comparison may be when we go to a club to see a rock or jazz concert today. We may choose the club for the sake of the band, but the social intercourse is just as important. We talk and comment the band on stage as they play.
Or to recite a French visitor in Venice by the end of the seventeenth century:

“The Young Nobility do not go much to the Comedy to laugh at the Buffoonery of the Actors, as to play their own ridiculous Parts: commonly bring Courtesans with them to their Boxes, where there is such a confusion and sometimes such surprising Accidents, so contrary to the Rules of Decency, which are at least due to all Public Places, that one must indeed in these Transactions before he can believe them. One of their most ordinary Diversions is not only to spit in the Pit, but likewise to pelt them with Snuffs and ends of Candles, and if they perceive any one decently clad, or with a Feather in his Hat, they are sure to ply him with the best of their endeavors, which they may do as being free from all notice or punishment; for the Nobles that are the Protectors of the Theater, having their Bravo’s in disguise at the doors, who are well armed, and ready to obey Orders: Besides the Comedy and Opera are look’d upon as Privilege-places where the least Violence would be reckon’d a Crime of State.

The liberty which they in the Pit take, according to the Example of the Nobility, do’s finally raise the Confusion to the outmost height. The Gondoliers chiefly do give their impertinent Applauses at some Action of the Buffoons, that would be tolerated in no other Place; neither is it seldom that the whole House makes such terrible Exclamations against the Actors, who are not so happy as to please, that they are forced to retire to be succeeded by others; for the continual cry is, fuora buffoni.”

In the renaissance Commedia dell’Arte was often played in rented spaces that were made for theatre, so called stanze. It was usually simple rooms, but gradually there where probably no greater difference between a theatre and a stanze. In Genoa theatre was played in Osteria dell Falcone since 1566 that became Teatro dell Falcone in 1644.
It was still a certain status to play in a simple stanze. One had control over the greater part of the performance. Even though most part of the audience went there to mingle with others, the performance was the main event in the room, in comparison with playing in the streets and markets. All groups were not rich enough to rent spaces. But in spite of the rent it was still the commercial best places to play. One could charge the audience and even set the price. Also the greatest and most famous groups were forced to play in public spaces to survive. They even started to take pre-bookings. 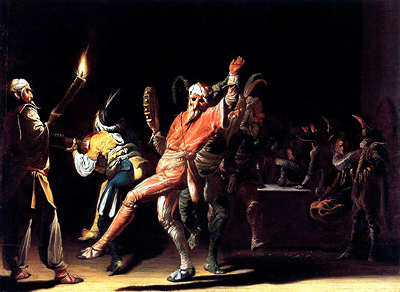 Planning became important; spaces should be rented; contracts should be written; ads and publicity became crucial for a group to make it. Impresarios, like Alvise Michiel and Ettore Tron in Venice, showed up. They built public theatre buildings and contracted Commedia dell’Arte groups.  These impresarios became more and more important, first in Venice and then further over Italy. Stanzi and theatres sprung out, like San Cassiano, San Luca and San Moisé in Venice. By the end of the seventeenth century there were sixteen theatres in Venice.
Here is a letter about the theatres and stanzi that grew up in Venice:

“23 may 1607, Ascension Day Eve. A group of actors have begun playing public performances in the town for six or eight soldi per person (it was 30 years ago that the Jesuits banned these comedies). They played first in S. Alvise in Ca’Lipamano, then in Rio Marin in S. Basegio in rooms rented by actors. Since the taste for this entertainment started to grow in the town, the theatre in S. Cassano became built by the Tron family, the theatre in S. Moise by the Zustiniano family and the theatre in S. Salvador by the Vendramin family. Things developed so that three groups played simultaneous and all attracted big crowds, and was used to play from S. Martin to Lent and from “sense” to the middle July.”

From the beginning the Commedia dell’Arte stages were always simple, a scene that was in the street or a square, without scene changes. But by the end of the seventeenth century it became more complex technique.

Commedia dell’Arte’s audience came from all classes; it was both men and women since they played indoors. There were voices however who were raised saying that it was unmorally for better women to attend public performances. It was less sensitive if a performance was shown, by a famous group, in a private context.

But it was, from the start, above all a male appearance, for the rich. We can read that from the moralists who thought that married men brought the “fantasies of the theatre” to their private life and the fact that the shows was free for torch bearer and prostitutes.