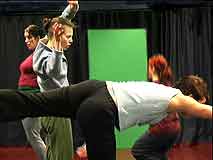 The Theatrestudio was created by Inge Waern (who was a Swedish theatre icon, show started her career in Prague and at Max Reinhardt’s school) in 1967, on encouragement from Étienne Decroux, among others, as the first and only education in physical theatre in Sweden. In 1984 Ulf Ekeram became artistic director for the Theatrestudio when it became an ”independent part” of Kulturama. 1996 I became artistic director. From 2007 the Theatrestudio in ”put to sleep” while we are waiting for new sponsors and a new form of organization.

Myself I left the Theatrestudio in 1987, and instead I started working as a substitute there almost at once until 1993 when I became regularly employed. And 1996 I became artistic director for the Theatrestudio, and I still am, even though we are not active at the moment.
Since I took the artistic responsibility I have first of all started up the second years students international tour, which got an grand finale by opening its last show on the main stage in Piazza San Marco at the carnival of Venice. I also started a forum where old and new “Studioits” have the possibility to meet and a scheduled Swedish and international guest artist activity where famous and less famous pedagogues, directors and actors have been teaching. Under my direction the Theatrestudio have been broader giving Commedia dell’Arte and comedy more room, an international course and its own, manifest organization. 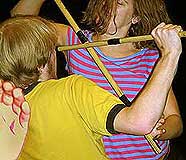 The pedagogy of the Theatrestudio was based on a number of foundations. One of these was the so called “Theatrestudio training”. It was built on a collection of voice and movement series, that had as a goal to stimulate the participants imaginative power and to reach the inner life of the actor; to help the actor to work in contact with his colleagues and his audience; to learn the actor to know his body as an instrument for his imagination; to encourage the actor physically in a daily training where expression and presence is the main point, in order to become free from blocks and resistance in rehearsals and on the stage.
Another of these foundations was the integrated education. The Theatrestudio work was based on the thought that ”everything is connected”. Consequently we tryed, as far as possible, to amalgamate the different subjects – movement, creation of characters, textual analysis, stage presentation, acrobatics and so on – into one.
Another foundation was group dynamics. The Theatrestudio worked in a tradition where the group is given lots of space in performances and other appearance.
In order to “open a window to the rest of the world of theatre” the Theatrestudio concentrated on bringing in Swedish and international guest teachers. 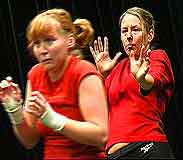 The work at the Theatrestudio was aimed towards work within fringe theatre groups. Therefore it was important for the participants to become independent. As self-governed actors – independent not only in that respect that they shall be entice to seek for their own creative force and work from their own ideas and avoid being controlled by directors and producers – they shall also be independent, meaning that they should be able to control things like economy, PR and press relations, tour planning, set design, costume and so on. 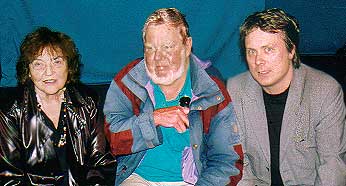