Theories of Laughter and Comedy – Part 2

Here are more theories as a continuing of PART 1. 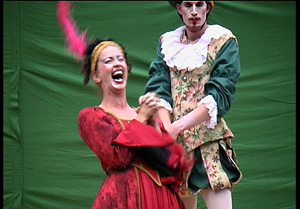 The magnanimous laughter has much to do with what I mean when I speak of humor as opposed to comedy (See HERE). It is a way to let “thing be where they are” since it doesn’t provoke anything. It talks about how we rejoice over other people’s prosperity. It is what we mean when we say that we laugh “with” someone instead of laughing “at” somebody. Those who advocate this theory says that it is based on knowledge of people’s conditions. In my opinion this form of laughter has very little to do with comedy. In The Theory of Inversion the reverse in gender, power and class structures, the upper and lower in the body, religious and stat hierarchies, profane and holy, are focused. The world is turned up-side-down and the audience is let in to that world. The theory takes its ideas from the Carnival and the Feast of Fool or even as far back as the roman Saturnalias. It is comedy as a feast, were the joy of life and the feeling of immortality (See HERE) is spread. We can also talk about laughter as education. Here we see how the incongruence that shakes our accustomed thinking patterns and how the synthesis of that learn us something new about ourselves, the world or life itself.When the incongruence shows us our old patterns, we can understand them and then start to create new patterns. 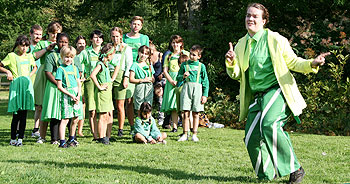 These ideas of laughter are usually combined somehow and there are a lot of other theories as well, such as: Laughter as Release, when we burst out laughing after letting go of high inner pressure. Laughter from Frenzy, when the high speed, the size of movement, the crazy whims and the madness of comedy that it allows makes us laugh just by its energy and how that energy spreads to the spectators. Comedy as social punishment, this relates to Henri Bergson’s ideas about schooling others to fit in society and that what is socially acceptable, using comedy . This comedy is both what makes a fool out of him who misuses his power and it is also what mobbing is made out of. Funny quarrels, it can be related to what Bakhtin writes about The language of the marketplace or what Caputi writes about the comic, dramatic combat.
Tweet
This entry was posted in 2 Vulgar Comedy and tagged anthony caputi, Bachtin, blog, blogg, buffoon, buffoons, carnival, comedy, commedia, Commedia dell arte, fools, fun, funny, Henri Bergson, jesters, jokes, Klingvall, Kompani Komedi, laugh, laughter, Michail Bachtin, Micke Klingvall, Mikhail Bakhtin, physical theatre, renaissance, rite, rites, rituals, scandinavian theatre, theatre, theatre education, theatre school, theatre student, theatre teacher, vulgar, vulgar comedy. Bookmark the permalink.

2 Responses to Theories of Laughter and Comedy – Part 2