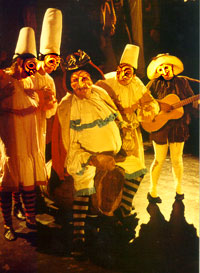 The usual use of this element in Commedia dell’Arte is either magic or disguises. We can find its origins in the Carnival’s and the May feast’s death and resurrection or in the Feast of Fools with its mutability and chaos, where mask and disguises always played a great part. The transitions can also get the character of the performance be more in an erratic chameleon world.

One of the most usual transformations is disguises. Innamorati disguises themselves to come close to each other, zanni disguise to flee their masters or to steal something, vecchi disguises to pretend to be younger and so on there are even submasks for the original masks to disguise in.
It is usually enough to dress up in a new gown or a coat and hat. The convention says that it is enough to make the masks unidentifiable. Some mask can still recognize them, depending on the needs for the plot.
On the other hand does the original masks never, change masks or reveal themselves as actors when in disguise, so that the original masks never gets lost for the audience. If, for example, Arlecchino and Pantalone changes roles in a scene it is important that is Arlecchino and Pantalone that are the ones that are changing roles, not the actors. It is something else when an actor takes of his mask to comment on something happening on stage as an actor. 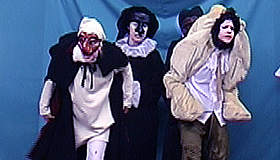 To change gender is also very common in Commedia dell’Arte. I is a heritage from the Carnival where they turned everything up-side-down, like conventions, hierarchies and gender was definitely turned around. Theatrical gender changes are as old as theatre itself, or at least as old as when we started to differ out men’s and women’s clothing.
Another common transformation is magic. It can be by magic rituals or formula, magic persons or places and off course magic drinks, love portions and such.
Madness played or real, also transforms the masks. It can in a way also work as a disguise when the “mad” mask only acts mad and are able to go back to normal at any given moment.

There are lots of other way to work with transformations as elements in the performance structure as well, both simple ones and more advanced. It can be anything from a mask that pretends to be a statue to avoid being discovered or an Innamorato who run around with a parrot cage on his head speaking in a female parrot voice in order to learn another language. And off course the classical end where a mask turns out to be the long lost father of one of the Innamorati. 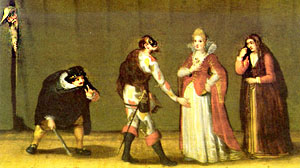