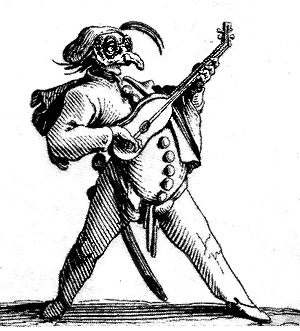 The task of the mask is to enlarge and, at the same time, clarify the character of the mask/role. We have already mentioned that the masks are representing archetypes, that they are driven by their urges, appetites and desires rather than psychology, since they don’t have a past, nor a future. The masks are still human – even if they never become “real humans” – with their own special urges.

When we put on a mask we must, in a way, limit ourselves. The mask does not only have its own way of moving, but also a way to see the world. It is the limitations of the mask that create its character. We must give up for the mask and obey its limitations.
The easiest way in to the masks is through their bodies; their posture, gestures and bodily attitudes. Commedia dell’Arte for example have, during its 500-years of tradition, developed the masks in a way that not only make them visually distinct for the audience, but also physically obvious for the actors, in a way that when putting on the mask, use its posture and voice the actor immediately understands the driving forces and limitations of the mask. When we, for example, use the mask of Pantalone; bending our knees and forward our hips until its hard even to take a step, bend our backs and shoulders as if protecting his purse and genitals, letting the hands from the elbow be constantly active; we can, by listening to what our bodies, in that position, has to say understand that he is an old but virile man, who’s interest is about sex and money.
It is surely good to talk about the mask, its urges, its approach and so on. But the most important work for the actor, to understand the mask, is to simply obey it. It is not an intellectual process – it is the mask that through the body, tells the actor how it is supposed to be played. 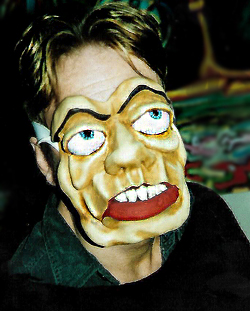 The mask is one-dimensional and static. It only shows one side of the human. (See HERE) The actor cannot express him- or herself through the mask. When the actor no longer is letting the mask control the actions, he starts to compromise its limitations and thereby complicate the mask. He decompose the character of the mask.
Neither does the mask change and therefore cannot develop as individual. Even if the mask goes from happy, uncaring to losing all in shame he will not learn. The mask is the same that it ever was, just as any cartoon.
That also goes for the external circumstances. If the masks would change status and presumptions the contrast between them would, and much of the, drama die. This is also the main reason why the it is very hard to exchange the roles in in modern drama for masks.

On the other hand we may talk about, at least in Commedia dell’Arte, the swing of the character[1]. Every mask includes its opposite. The mask can in any given moment suddenly play its opposite if the plot allows it. These moments are always most temporary and the masks always goes right back to their usual characters, in order not to be obscure.

[1] A term that comes from Dell´Arte International School in Blue Lake, USA.