Vulgar Comedy and its origins in Scandinavia (Part 1)

In Scandinavia we didn’t really have court or official theatre until Christianity was introduced, not even in its early, crude form. In order to prove that, I lean on research about early, international theatre and on theatre in a wide perspective with theatrical games and early processions.
The Greek words ”theatre” or “drama” didn’t even exist in Scandinavia before the church came. Instead the word ”leikr” was used. The word could be used to mean everything from religious rites, sport to drama music or even war and love. I would say that it is still closer to what it really is about compared to the Greek words Theatre = “a place for viewing” or drama = plot or action. 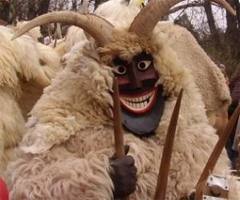 It is also more or less proven that it is the play and the joy of mimicking that is the base of theatre. Anthropologists have studied pre Stone Age societies and found that they started to act in front of each other long before they had organized religion. Just like children mimic, the grown hunters mimic their quarry, in collective hunt and animal scenes, but without necessarily play the actual action – the killing of the animal.
From a psychological point of view this is the same idea, for the hunter to get the courage and the strength to carry out the hunt, as for the children in their play to prepare and learn about their coming life. But the theatre here is still only a game to play for fun.

The theatre or the rites becomes magical or cultic approximately when the rites begins to involve the killing of the pray. Suddenly the theatre gets a more practical task. I have to make sure the hunt and the harvest goes well, that the children strong and fertile adults, to keep away evil spirits and so on. The magical or the religious, hunting rites are done when the participants together compel a totem to help hunt down an animal, through dance, rhythms and to shape the illusion of a down hunted pray.
In the north of Norway archeologists have found cultic moose heads in stone and petroglyphs with dancing people from the Stone Age, about 3000 – 4000 years ago.